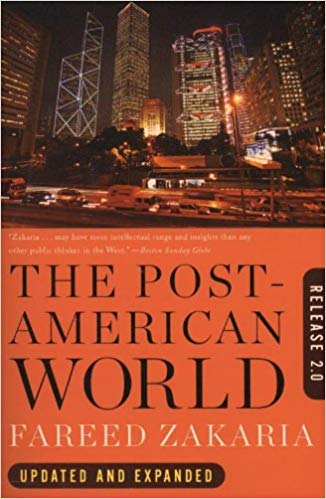 Thought provoking on how America might lose its global prominence, and the steps we ought to take to preserve it.

“Generations from now, when historians write about these times, they might note that, in the early decades of the twenty-first century, the United States succeeded in its great and historic mission— it globalized the world. But along the way, they might write, it forgot to globalize itself.”

“Other educational systems teach you to take tests; the American system teaches you to think.”

“Perhaps most worryingly, Americans are borrowing 80 percent of the world’s surplus savings and using it for consumption. In other words, we are selling off our assets to foreigners to buy a couple more lattes a day. These problems have accumulated at a bad time because, for all its strengths, the American economy now faces some of its strongest challenges in history.”

“The entire British government works aggressively to make London a global hub. Washington, by contrast, spends its time and energy thinking of ways to tax New York, so that it can send its revenues to the rest of the country. Regulators from Poland to Shanghai to Mumbai are moving every day to make their systems more attractive to investors and manufacturers all over the world. Even on immigration, the European Union is creating a new “blue card,” to attract highly skilled workers from developing countries.”

“For America to thrive in this new and challenging era, for it to succeed amid the rise of the rest, it need fulfill only one test. It should be a place that is as inviting and exciting to the young student who enters the country today as it was for this awkward eighteen-year-old a generation ago.”