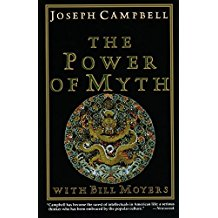 A fantastic book told through 8 interviews done on the power of myth in our lives. It really made me think about how we lack cultural traditions and narratives, and how few people go through rites of initiation or make sacrifices for big commitments in their lives. I wonder how much of feeling lost comes from lacking a strong narrative to track your life against, to motivate and guide you.

The book is broken out by 8 interviews done over two years, so my notes here are organized by those sections.

Myth and the Modern World

This section covers how we’ve lost the power of myth in the modern world, and according to Campbell, this explains many of the strifes and feelings of lostness that we experience, especially youths.

We’re so obsessed with outer value: money, status, etc. that we forget about the inner value, our internal development, and that’s all the real value there is anyway.

Puberty Rites: In primal societies you go through a puberty rite, especially as a boy. You go kill the lion, get beat up, get circumcised. It’s brutal, but tribal and communal, and once you go through it, you know you are not a boy anymore. You’re a man. You’ve crossed over. We’ve lost these points of transition, no one goes through a specific struggle to reach a new plane of life, and no one has to make that kind of sacrifice to transition.

“One thing that comes out in myths is that at the bottom of the abyss comes the voice of salvation. The black moment is the moment when the real message of transformation is going to come. At the darkest moment comes the light.”

In this section, Campbell explores the internal struggles and developments that we all go through, and how myth aids their development.

The serpent and eagle are timeless symbols: the serpent is bound to the earth, the eagle is in flight, it’s a conflict we all experience. And then the dragon is the combination of the two: a mythological fusion of the earthly and heavenly beings.

Certain mythological themes repeat throughout history. The Bassari people of Togo have a creation myth similar to the Christian one, in which a snake tricks the first persons into eating fruit, and their god, Unumbotte, asks who told them they could eat the fruit and they say the snake did. These kinds of stories repeat throughout history, and have some sort of pervasive significance beyond any one religion. Likewise, the Sumerian people had an old myth about a man the gods created to tend to their garden (Adam).

Every religion is true when thought of metaphorically, but you get in trouble when you start thinking of the metaphors as facts.

We typically live in a world of duality: good and bad, true and untrue, but mythology shows us that there’s an underlying union between the polarities, a Yin and Yang where there is always some good in bad and vice versa. There is no black and white.

The denial of mythology, and the absence of transcendent religious experiences, is what Campbell thinks has turned young people to drugs.

He has a good bit on Santa Claus, that an initiation is when you move past the false reality and understand the deeper meaning. There is no Santa Claus, but he is a metaphor for the relationship between parents and children. That relationship truly exists, Santa Claus doesn’t.

More on puberty rites: Boys have to be “ripped” away from their mothers to see when it’s time to grow up. The men would literally come and take them from their mothers to initiate them. We don’t have that kind of symbolic tearing away anymore. Women, on the other hand, still go through puberty, and the moment she has her first period, she knows she is no longer a girl. That transition still exists for women in modern society, not for men.

“If you follow your bliss, you put yourself on a kind of track that has been there all the while, waiting for you, and the life that you ought to be living is the one you are living. Wherever you are–if you are following your bliss, you are enjoying that refreshment, that life within you, all the time.”

Sacred places: Campbell says that everyone needs a special rom, or hour of the day, where they don’t know what’s going on in the news or what they have to do or what anyone owes them. Time to be alone with themselves, to allow for creative incubation. Sometimes nothing will happen when you’re there, but if you cultivate that alone time and that removal, eventually, something will pop out of it.

Many gods of death were also gods of birth or fertility or regeneration. The Haitian Voodoo god of death, Ghede, is also the god of sex. Osiris was the judge and lord of the dead and the lord of regeneration and life. Vishnu destroys the world, and rebuilds it. You have to have death in order to have life.

Men say they love war because it makes them feel alive. In war, you can’t be anywhere else but there. Life is pain, suffering, horror, but you’re alive.

Finding bliss: We all have those little moments, those little intuitions, where for a fleeting second we think we might know where our bliss is. We have to grab it. No one can tell you what it will be, you have to learn to recognize it within yourself.

Sacrifice in Work: Can you endure 10 years of disappointment and no one thinking your work is good? Can you push through the rejection? Or do you need to win on the first go? Have the best seller right away. Great work requires sacrifice, you need to be up to the challenge, and be focused on your bliss, not on the fortune.

Our lives bring out our characters, and you find out more about yourself as you go on. That’s why it’s better to put yourself in situations that will bring out your higher nature instead of your lower, don’t go where it’s slippery.

We focus on Icarus who flew too close to the sun and perished, but just as important is his father Daedalus, who flew the middle path between the sun and the ocean and made it across to the other shore.

Mythology vs. Religion: Mythology is fluid, and many of the myths can be self-contradictory. Or different myths with different lessons across a culture. But theology and religion fix things a certain way, they “turn poetry into prose,” and say there are rules and everything is literal. Religion is much less flexible. You don’t have to believe there was a King Arthur, but Christianity requires that you believe there was a Christ.

Myths give external explanations and stories for internal strifes. Slaying monsters is slaying the dark things inside of you. If you’re telling yourself “oh no! I couldn’t do that! I couldn’t be a writer!” that’s the dragon inside of you, and you have to slay it. Our journey is to save ourselves.

Thinking in mythological terms helps you recognize its themes in your own life. You learn to see the clues. The question then is if you’ll be able to say yes to your adventure when it presents itself, the adventure of being alive.

The Gift of the Goddess

I didn’t get anything in particular from this interview.

Tales of Love and Marriage

There are many kinds of love. First there was just Eros, the excitement of sexual desire. Then there was also Amor, something special that was more personal and deep. And Apage is the impersonal, love of your neighbor.

Compassion is suffering with someone. “Com-” is together, and “passion” is suffering. To have compassion for someone, you must suffer with them.

Yin and Yang, sacrificing to the relationship, to the whole, similar to as discussed in the first interview.

Love is its own kind of pain, the pain of being alive.

There is a Hindu idea that “no one can worship a god but a god.” You have to see in yourself some element of the god, and what he represents to you, in order to worship him.

Mythology is typically shared with some humor, and is lighthearted. Religion is serious and strict.

Everything you do has a potential, and the mission of life is to fulfill that potential. When you follow your bliss, there’s something inside you that knows when you’re following it, and knows when you fall off. If you deviate in the pursuit of money or fame or sex you’ve lost your life, but if you stay with your passion, even if you don’t get the money, you still have your bliss.

The Elephant in the Brain by Robin Hanson and Kevin Simler