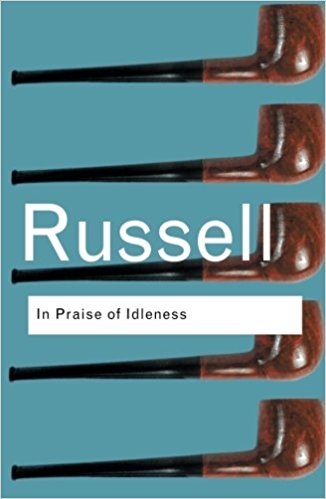 A must read for anyone who has trouble relaxing, or who works 8+ hours a day. I like re-reading it when I start to feel guilty for not buckling down and working all day every day.

“But in countries which do not enjoy Mediterranean sunshine idleness is more difficult, and a great public propaganda will be required to inaugurate it. I hope that, after reading the following pages, the leaders of the Y.M.C.A. will start a campaign to induce good young men to do nothing. If so, I shall not have lived in vain.”

“If he spent his money, say, in giving parties for his friends, they (we may hope) would get pleasure, and so would all those upon whom he spent money, such as the butcher, the baker, and the bootlegger.”

“The morality of work (the notion that everyone ought to work to earn their life) is the morality of slaves, and the modern world has no need of slavery.”

“Leisure is essential to civilization, and in former times leisure for the few was only rendered possible by the labors of the many. But their labors were valuable, not because work is good, but because leisure is good. And with modern technique it would be possible to distribute leisure justly without injury to civilization.”

“The war showed conclusively that, by the scientific organization of production, it is possible to keep modern populations in fair comfort on a small part of the working capacity of the modern world.”

“If, at the end of the war, the scientific organization, which had been created in order to liberate men for fighting and munition work, had been preserved, and the hours of work had been cut down to four, all would have been well.”

“The wise use of leisure, it must be conceded, is a product of civilization and education. A man who has worked long hours all his life will be bored if he becomes suddenly idle. But without a considerable amount of leisure a man is cut off from many of the best things.”

“There is no longer any reason why the bulk of the population should suffer this deprivation; only a foolish asceticism, usually vicarious, makes us continue to insist on work in excessive quantities now that the need no longer exists.”

“We think too much of production, and too little of consumption. One result is that we attach too little importance to enjoyment and simple happiness, and that we do not judge production by the pleasure that it gives to the consumer.”

“It is an essential part of any such social system that education should be carried further than it usually is at present, and should aim, in part, at providing tastes which would enable a man to use leisure intelligently.”

“The pleasures of urban populations have become mainly passive: seeing cinemas, watching football matches, listening to the radio, and so on. This results from the fact that their active energies are fully taken up with work; if they had more leisure, they would again enjoy pleasures in which they took an active part.”

“Without the leisure class, mankind would never have emerged from barbarism.”

“At present, the universities are supposed to provide, in a more systematic way, what the leisure class provided accidentally and as a by-product.”

“In a world where no one is compelled to work more than four hours a day, every person possessed of scientific curiosity will be able to indulge it, and every painter will be able to paint without starving, however excellent his pictures may be.”

“Young writers will not be obliged to draw attention to themselves by sensational potboilers, with a view to acquiring the economic independence needed for monumental works, for which, when the time at last comes, they will have lost the taste and the capacity.”

“At least 1 per cent will probably devote the time not spent in professional work to pursuits of some public importance, and, since they will not depend upon these pursuits for their livelihood, their originality will be unhampered, and there will be no need to conform to the standards set by elderly pundits.”

“Good nature is, of all moral qualities, the one the world needs most, and good nature is the result of ease and security, not of a life of arduous struggle.”

“Hitherto we have continued to be as energetic as we were before the machines; in this we have been foolish, but there is no reason to go on being foolish forever.”

Letters from a Stoic by Seneca

Discipline & Punish: The Birth of the Prison by Michael Foucault

The Almanack of Naval Ravikant by Eric Jorgenson, Jack Butcher, and Tim Ferriss