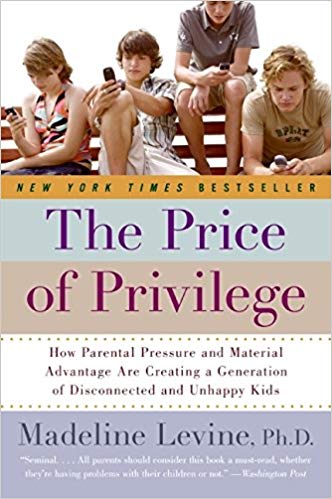 The first 1/3 is a great primer on the problems of popular parents styles and how that leads to depression, angst, and the excellent sheep problems. The rest is how to parent better, which I (obviously) did not find quite as useful (but if you’re a parent, read it!!!)

Basically, kids are being emotionally destroyed by a hyper competitive education system, leading to systemic depression, angst, anger, drug abuse, and even suicide among adolescents. This leads to a host of problems later in life, and it’s up to parents and educators to prevent it from happening.

“A superficial reading of this type of teenager might suggest that they are simply spoiled or overindulged. It is tempting to trivialize the problems of kids who have been the recipients of exhaustive parental intervention and have been liberally handed both material and educational opportunities. Yet the depletion I felt that Friday afternoon came not from treating spoiled or indulged kids, but from treating troubled ones.”

“A talented thirteen-year-old seriously considers hacking his way into the school computer system to raise his math grade. An academically outstanding sixteen-year-old thinks about suicide when her SAT scores come back marginally lower than she had expected. A fourteen-year-old boy cut from his high school junior varsity basketball team is afraid to go home, anticipating his father’s disappointment and criticism.”

“The kids I see have been given all kinds of material advantages, yet feel that they have nothing genuine to anchor their lives to. They lack spontaneity, creativity, enthusiasm, and, most disturbingly, the capacity for pleasure.”

“As a result, kids can’t find the time, both literal and psychological, to linger in internal exploration; a necessary precursor to a well-developed sense of self. Fantasies, daydreaming, thinking about oneself and one’s future, even just “chilling” are critical processes in self-development and cannot be hurried.”

“Psychological development goes awry when children are pressured into valuing the views of others over their own. A young girl works madly to maintain her high GPA because “my mom would have a breakdown if my grades dropped.” This girl might be an enthusiastic student under other circumstances, but her need to keep her mother’s anxiety at bay is bound to interfere with her capacity to work independently and with pleasure. Ultimately, motivation for any venture needs to feel like it comes from inside.”

“Authenticity is not aided when kids have to battle against parents who are implanting other, often unrealistic “selves”— stellar student, outstanding athlete, perfect kid— into their teenager’s already crowded psychological landscape.”

“We need to examine our parenting paradigm. Raising children has come to look more and more like a business endeavor and less and less like an endeavor of the heart. We are overly concerned with “the bottom line,” with how our children “do” rather than with who our children “are.” We pour time, attention, and money into insuring their performance, consistently making it to their soccer game while inconsistently making it to the dinner table.”

“America’s newly identified at-risk group is preteens and teens from affluent, well-educated families. In spite of their economic and social advantages, they experience among the highest rates of depression, substance abuse, anxiety disorders, somatic complaints, and unhappiness of any group of children in this country.”

“Studies of public school students have shown that as many as 22 percent of adolescent girls from financially comfortable families suffer from clinical depression. This is three times the national rate of depression for adolescent girls. By the end of high school, as many as one-third of girls from these families can exhibit clinically significant symptoms of anxiety.”

“She is set on Wharton, Sloan, or Haas, the three top-ranked undergraduate business schools in the country. I point out that these schools are extremely difficult to get into, and that Catherine has never mentioned whether the schools themselves or the towns they’re located in are appealing to her. Catherine dismisses my concern. “I want to get a good job when I graduate. One of those schools will be my ticket,” she insists.”

“Regardless of whether research has focused on younger kids, older kids, or has followed youngsters throughout their adolescence, two factors repeatedly emerge as contributing to their high levels of emotional problems. The first is achievement pressure and the second is isolation from parents. 31 While achievement pressure and isolation from adults appear to be mutually exclusive (somebody has to be putting the pressure on), they are not. In fact, achievement pressure often comes from parents who are overinvolved in how well their children perform and inadequately involved in monitoring these same children in other areas. We can be overinvolved in the wrong things, and underinvolved in the right things, both at the same time.”

“Adolescent suicide is often precipitated by a perceived failure— at school, with parents, or in a relationship. Adolescents are idealistic and highly self-critical; additional parental pressures to meet harsh performance demands, while perhaps temporarily successful in driving academic achievement, are ultimately destructive. This does not mean that high expectations for children are potentially lethal. On the contrary, high expectations are found to promote achievement and competency in children. It is when a parent’s love is experienced as conditional on achievement that children are at risk for serious emotional problems. These are children who are driven to be “perfect” in the hope of garnering parental love and acceptance. Their inevitable missteps activate intense feelings of shame and hopelessness.”

“Parents can be overinvolved and children can still feel isolated. Controlling and overinvolved parents typically leave kids feeling angry or alienated, neither of which is conducive to emotional closeness. And it is emotional closeness, maternal warmth in particular, that is as close as we get to a silver bullet against psychological impairment.”

““These parents certainly want the best for their children. But they want it in a mechanistic way. They want buttons pushed, and pushed quickly, so that their kids get better with little effort. But helping troubled kids takes a long time and what these kids really need are their parents themselves.””

“Kids who don’t feel close to their parents are unlikely to confide in them, and affluent parents have to be alert to the fact that, as a group, we underestimate the impact of our absences and overestimate the degree of closeness our children feel toward us.”

“For example, parents need to remember that kids love rituals and depend on them for a sense of continuity and connection. Perhaps the single most important ritual a family can observe is having dinner together. Families who eat together five or more times a week have kids who are significantly less likely to use tobacco, alcohol, or marijuana, have higher grade-point averages, less depressive symptoms, and fewer suicide attempts than families who eat together two or fewer times a week.”

“What’s so wrong with putting pressure on kids to achieve? After all, failed educational experiments like Summerhill, the flagship of “do your own thing” education in the 1960s, suggest that, left to their own devices, kids are not necessarily disciplined or even creative learners.”

“Well-developed autonomy allows kids to reliably and confidently see the world through their own eyes without fear of disappointing their parents.”