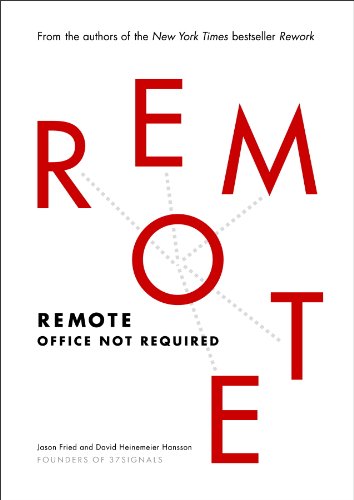 A light read on the benefits of remote work. Some bias since the authors work in a leading remote company…

“In thirty years’ time, as technology moves forward even further, people are going to look back and wonder why offices ever existed. —RICHARD BRANSON, FOUNDER OF VIRGIN GROUP*”

“If you ask people where they go when they really need to get work done, very few will respond “the office.” If they do say the office, they’ll include a qualifier such as “super early in the morning before anyone gets in” or “I stay late at night after everyone’s left” or “I sneak in on the weekend.” What they’re trying to tell you is that they can’t get work done at work. The office during the day has become the last place people want to be when they really want to get work done. That’s because offices have become interruption factories. A busy office is like a food processor— it chops your day into tiny bits. Fifteen minutes here, ten minutes there, twenty here, five there.”

“According to the research,* commuting is associated with an increased risk of obesity, insomnia, stress, neck and back pain, high blood pressure, and other stress-related ills such as heart attacks and depression, and even divorce.”

“Your life no longer needs to be divided into arbitrary phases of work and retirement. You can blend the two for fun and profit— design a better lifestyle that makes work enjoyable because it’s not the only thing on the menu. Shed the resentment of golden handcuffs that keep you from living how you really want to live.”

“When you have dozens, even hundreds, of competitors within walking distance of your office, it should come as no surprise when your employees cross the street and join the next hot thing.”

“People have an amazing ability to live down to low expectations. If you run your ship with the conviction that everyone’s a slacker, your employees will put all their ingenuity into proving you right.”

“Once you’re ASAP-free, however, you’ll be amazed at how your former self was able to get anything done in the face of constant in-person interruptions. It’s almost zen-like to let go of the frenzy, to let answers flow back to you when the other party is ready to assist. Use that calm to be even more productive.”

“At 37signals, we’ve found that we need a good four hours of overlap to avoid collaboration delays and feel like a team.”

“The best way we’ve found to accurately judge work is to hire the person to do a little work before we take the plunge and hire them to do a lot of work. Call it “pre-hiring.” Pre-hiring takes the form of a one- or two-week mini-project. We usually pay around $ 1,500 for the mini-project. We never ask people to work for free. If we wouldn’t do it for free, why would we ask someone else to do it?”

“The job of a manager is not to herd cats, but to lead and verify the work. The trouble with that job description is that it requires knowledge of the work itself. You can’t effectively manage a team if you don’t know the intricacies of what they’re working on.”

“In the same way that you don’t want a gang of slackers, you also don’t want a band of supermen. The best workers over the long term are people who put in sustainable hours. Not too much, not too little— just right. Forty hours a week on average usually does the trick.”