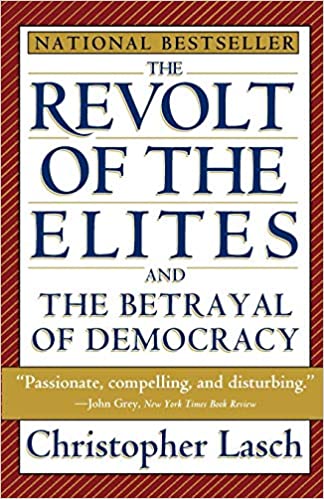 Enjoyed the first 1/3 which discussed our general failure to communicate effectively in our democracy. But it kinda dragged after that, got much less out of the last 2/3.

In the nineteenth century wealthy families were typically settled, often for several generations, in a given locale. In a nation of wanderers their stability of residence provided a certain continuity. Old families were recognizable as such, especially in the older seaboard cities, only because, resisting the migratory habit, they put down roots. Their insistence on the sanctity of private property was qualified by the principle that property rights were neither absolute nor unconditional. Wealth was understood to carry civic obligations. Libraries, museums, parks, orchestras, universities, hospitals, and other civic amenities stood as so many monuments to upper-class munificence. (Page 4)

The new elites are at home only in transit, en route to a high-level conference, to the grand opening of a new franchise, to an international film festival, or to an undiscovered resort. Theirs is essentially a tourist's view of the world-not a perspective likely to encourage a passionate devotion to democracy. (Page 6)

In our preoccupation with words, we have lost sight of the tough realities that cannot be softened simply by flattering people's selfimage. What does it profit the residents of the South Bronx to enforce speech codes at elite universities? (Page 7)

Once knowledge is equated with ideology, it is no longer necessary to argue with opponents on intellectual grounds or to enter into their point of view. It is enough to dismiss them as Eurocentric, racist, sexist, homophobic-in other words, as politically suspect. (Page 13)

"Diversity"-a slogan that looks attractive on the face of it-has come to mean the opposite of what >> it appears to mean. In practice, diversity turns out to legitimize a new dogmatism, in which rival minorities take shelter behind a set of beliefs impervious to rational discussion.The physical segregation of the population in self-enclosed, racially homogeneous enclaves has its counterpart in the balkanization of opinion. Each group tries to barricade itself behind its own dogmas. We have become a nation of minorities; only their official recognition as such is lacking to complete the process.* (Page 17)

Opinion thus becomes a function of racial or ethnic identity, of gender or sexual preference. Self-selected minority "spokespersons" enforce this conformity by ostracizing those who stray from the party line-black people, for instance, who “think white." (Page 18)

The thinking classes are fatally removed from the physical side of life-hence their feeble attempt to compensate by embracing a strenuous regimen of gratuitous exercise.Their only relation to productive labor is that of consumers. They have no experience of making anything substantial or enduring. They live in a world of abstractions and images, a simulated world that consists of computerized models of reality-“hyperreality," as it has been called–as distinguished from the palpable, immediate, physical reality inhabited by ordinary men and women. Their belief in the “social construction of reality"-the central dogma of postmodernist thought-reflects the experience of living in an artificial environment from which everything that resists human control (unavoidably, everything familiar and reassuring as well) has been rigorously excluded. Control has become their obsession. In their drive to insulate themselves against risk and contingency-against the unpredictable hazards that afflict human life-the thinking classes have seceded not just from the common world around them but from reality itself. (Page 20)

Doctors used to marry nurses, lawyers and executives their secretaries. Now upper-middle-class men tend to marry women of their own class, business or professional associates with lucrative careers of their own. "What if the $60,000 lawyer marries another $60,000 lawyer," Mickey Kaus asks in his book Tbe End of Equality, "and the $20,000 clerk marries a $20,000 clerk? Then the difference between their incomes suddenly becomes the difference between $120,000 and $40,000," and "although the trend is still masked in the income statistics by the low average wages of women," Kaus adds, “it's obvious to practically everyone, even the experts, that something like this is in fact happening." It is unnecessary, incidentally, to seek much further for an explanation of feminism's appeal to the professional and managerial class. Female careerism provides the indispensable basis of their prosperous, glamorous, gaudy, sometimes indecently lavish way of life. (Page 33)

Their investment in education and information, as opposed to property, distinguishes them from the rich bourgeoisie, the ascendancy of which characterized an earlier stage of capitalism, and from the old proprietary class-the middle class in the strict sense of the term-that once made up the bulk of the population. (Page 34)

Their reading consists for the most part of works written from a point of view identical with their own.Instead of engaging unfamiliar arguments, they are content to classify them as either orthodox or heretical. The exposure of ideological deviation, on both sides, absorbs energies that might better be invested in self-criticism, the waning capacity for which is the surest sign of a moribund intellectual tradition. (Page 81)

Even if we can't agree on the definition of a good lifeand it could be argued that we have not yet seriously made the effort-we can surely agree on minimal standards of workmanship, literacy, and general competence. Without these, we have no basis on which either to demand respect or to grant it. Common standards are absolutely indispensable to a democratic society. Societies organized around a hierarchy of privilege can afford multiple standards, but a democracy cannot. Double standards mean second-class citizenship. (Page 88)

The problem of racial intolerance is closely linked to fanaticism. Here again there is a good deal of complacency and self-righteousness mixed up in the fear of intolerance.The thinking classes seem to labor under the delusion that they alone have overcome racial prejudice. The rest of the country, in their view, remains incorrigibly racist. Their eagerness to drag every conversation back to race is enough in itself to invite the suspicion that their investment in this issue exceeds anything that is justified by the actual state of race relations. Monomania is not a sign of good judgment.But whether it springs from self-righteousness or panic or a mixture of the two, the assumption that most Americans remain racists at heart cannot stand up to close examination. (Page 90)

The hope that rising expectations would lead men and women to invest their ambitions in their offspring was destined to be disappointed in the long run. The more closely capitalism came to be identified with immediate gratification and planned obsolescence, the more relentlessly it wore away the moral foundations of family life. The rising divorce rate, already a source of alarm in the last quarter of the nineteenth century, seemed to reflect a growing impatience with the constraints imposed by long-term responsibilities and commitments. (Page 95)

The sentimental veneration of motherhood, even at the peak of its influence in the late nineteenth century, could never quite obscure the reality that unpaid labor bears the stigma of social inferiority when money becomes the universal measure of value. In the long run women were forced into the workplace not only because their families needed extra income but because paid labor seemed to represent their only hope of gaining equality with men. (Page 96)

With both parents in the workplace and grandparents conspicuous by their absence, the family is no longer capable of sheltering children from the market. The television set becomes the principal baby-sitter by default. Its invasive presence deals the final blow to any lingering hope that the family can provide a sheltered space for children to grow up in. (Page 96)

Sooner or later the market tends to absorb them all. It puts an almost irresistible pressure on every activity to justify itself in the only terms it recognizes: to become a business proposition, to pay its own way, to show black ink on the bottom line. It turns news into entertainment, scholarship into professional careerism, social work into the scientific management of poverty. Inexorably it remodels every institution in its own image. (Page 98)

Jane Jacobs in The Death and Life of Great American Cities, an attack on city planning that applies to social planning in general. "The myth that playgrounds and grass and hired guards or supervisors are innately wholesome for children and that city streets, filled with ordinary people, are innately evil for children, boils down to a deep contempt for ordinary people." (Page 99)

People who have lost the habit of self-help, who live in cities and suburbs where shopping malls. have replaced neighborhoods, and who prefer the company of close friends (or simply the company of television) to the informal sociability of the street, the coffee shop, and the tavern are not likely to reinvent communities just because the state has proved such an unsatisfactory substitute. Market mechanisms will not repair the fabric of public trust. (Page 100)

Our approach to eating and drinking is less and less mixed with ritual and ceremony. It has become strictly functional: We eat and drink on the run. Our fast-paced habits leave neither time nor–more important-places for good talk, even in cities the whole point of which, it might be argued, is to promote it. (Page 118)

A candidate with the courage to abstain from "debates" organized by the media would automatically distinguish himself from the others and command a good deal of public respect.Candidates should insist on directly debating each other instead of responding to questions put to them by commentators and pundits. Their passivity and subservience lower them in the eyes of the voters. They need to recover their self-respect by challenging the media's status as arbiters of public discussion. A refusal to play by the media's rules would make people aware of the vast, illegitimate influence the mass media have come to exercise in American politics.It would also provide the one index of character that voters could recognize and applaud. (Page 166)