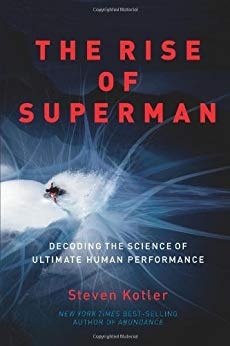 The best book on getting a basic understanding of Flow states and how to get there. Highly recommend it since it’s much more approachable than the landmark book “Flow.”

“Many of Heim’s subjects reported these profoundly altered states without being in actual jeopardy— they only thought they were in life-threatening situations. This was a key detail. These experiences seemed mystical. If they only arose solely in dire straights, then perhaps they really were communiqués from beyond the beyond. Yet if perception and psychology were the triggers, then the puzzle was more physiological than paranormal— and that opened the door to considerably more interesting possibilities.”

“The first was that these experiences were profound— people were radically different on the other side. Happier, more content, significantly more fulfilled. The results were undeniable. No matter the seemingly fantastic nature of the events, James was certain they produced changes that were undeniably psychologically real.”

“Secondly, high-risk adventure tended to amplify not only mental performance, but physical performance as well.”

““Most people live in a very restricted circle of their potential being. They make use of a very small portion of their possible consciousness, and of their soul’s resources in general, much like a man who, out of his whole organism, should get into a habit of using and moving only his little finger.””

““Great emergencies and crisis show us how much greater our vital resources are than we had supposed.”

“[F] atigue gets worse up to a certain critical point, when gradually or suddenly it passes away, and we are fresher than before. We have evidently tapped a level of new energy, masked until then by the fatigue-obstacle usually obeyed. There may be layer after layer of this experience. A third and a fourth “wind” may supervene. Mental activity shows the phenomenon as well as physical, and in exceptional cases we may find, beyond the very extremity of fatigue-distress, amounts of ease and power that we never dreamed ourselves to own, sources of strength habitually not taxed at all, because habitually we never push through the obstruction, never pass those early critical points.”

“In fact, when Csikszentmihalyi dove deeper into the data, he discovered that the happiest people on earth, the ones who felt their lives had the most meaning, were those who had the most peak experiences.”

“Now consider what these abused drugs do. The primary illicit drug of choice is marijuana— that triggers the release of anandamide. Antidepressants are some combination of dopamine, norepinephrine, and serotonin; tobacco and ADHD drugs affect dopamine and norepinephrine; and prescription drugs of abuse are opioids like Oxycontin— meaning they affect the endorphin system. In other words, Americans are literally killing themselves trying to achieve artificially the same sensations that flow produces naturally.”

“Psychologists describe flow as “autotelic,” from the Greek auto (self) and telos (goal). When something is autotelic— i.e., produces the flow high— it is its own reward.”

“As we’ll explore in depth in Part Two of this book, the state shows up most reliably when we’re using our skills to the utmost. It requires challenge.”

“Technology offers even more examples. Video-game players get into flow so frequently that Csikszentmihalyi’s ideas have become the most widely accepted theoretical framework for explaining the lure of the joystick. Studies have shown that the amount of flow generated by a video game directly correlates to everything from player engagement to overall product success.”

“Quite simply: 300 feet underwater, there’s no way to be elsewhere. When she says, “It’s really important to not let myself get consumed,” she means, when diving, not thinking about the future (where she could run out of air) or the past (where a poor decision made her use up too much air) is survival.”

“Study after study shows that we’re terrible multitaskers. By trying to improve performance by being everywhere and everywhen, we end up nowhere and never.”

“Applying this idea in our daily life means breaking tasks into bite-size chunks and setting goals accordingly. A writer, for example, is better off trying to pen three great paragraphs at a time— the equivalent of moving through Mandy-Rae’s kick cycles— rather than attempting one great chapter. Think challenging, yet manageable— just enough stimulation to shortcut attention into the now, not enough stress to pull you back out again.”

“Flow appears near the emotional midpoint between boredom and anxiety, in what scientists call the flow channel— the spot where the task is hard enough to make us stretch but not hard enough to make us snap. How hard is that? Answers vary, but the general thinking is about 4 percent. That’s it. That’s the sweet spot. If you want to trigger flow, the challenge should be 4 percent greater than the skills.”

“The ability to learn faster than your competitors is the only sustainable competitive advantage.”

“The US military trained snipers in flow twice as fast as normal. McKinsey established that executives in flow are five times more effective than their steady-state peers. This is exactly what 150 years of flow research has revealed; this is what the recent revolution in action and adventure sports clearly demonstrates, flow brings out the very best in us— and for certain, it’s that very best we’ll need to create a world of abundance.”