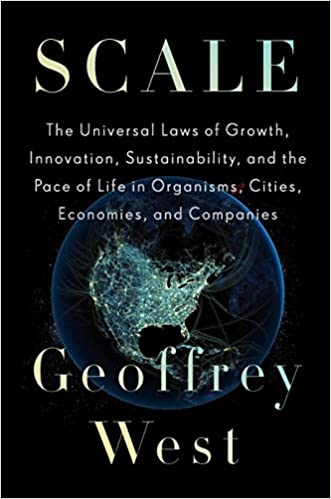 A fascinating wide-ranging book combining insights from various disciplines into how things grow, how they change as they grow, and what we can infer about life, cities, and businesses.

The open-ended exponential growth of cities stands in marked contrast to what we see in biology: most organisms, like us, grow rapidly when young but then slow down, cease growing, and eventually die. Most companies follow a similar pattern, with almost all of them eventually disappearing, whereas most cities don't. (Page 10)

Surprisingly, an animal that is twice the size of another, and therefore composed of about twice as many cells, requires only about 75 percent more food and energy each day, rather than 100 percent more, as might naively have been expected from a linear extrapolation. (Page 18)

This collective outcome, in which a system manifests significantly different characteristics from those resulting from simply adding up all of the contributions of its individual constituent parts, is called an Emergent Behavior. It is a readily recognizable characteristic of economies, financial markets, urban communities, companies, and organisms. (Page 23)

So, for example, if the size of a mammal is doubled, its heart rate decreases by about 25 percent. The number 4 therefore plays a fundamental and almost magically universal role in all of life. (Page 26)

Like organisms, cities are indeed approximately scaled versions of one another, despite their different histories, geographies, and cultures, at least as far as their physical infrastructure is concerned. (Page 29)

Perhaps even more remarkably they are also scaled socioeconomic versions of one another. Socioeconomic quantities such as wages, wealth, patents, AIDS cases, crime, and educational institutions, which have no analog in biology and did not exist on the planet before humans invented cities ten thousand years ago, also scale with population size but with a superlinear (meaning bigger than one) exponent of approximately 1.15. (Page 29)

This is satisfyingly consistent, but there's a big catch, which goes under the forbidding technical name of a Finite Time Singularity. In a nutshell, the problem is that the theory also predicts that unbounded growth cannot be sustained without having either infinite resources or inducing major paradigm shifts that "reset" the clock before potential collapse occurs. We have sustained open-ended growth and avoided collapse by invoking continuous cycles of paradigm-shifting innovations such as those associated on the big scale of human history with discoveries of iron, steam, coal, computation, and, most recently, digital information technology. (Page 31)

Like organisms and cities, companies also scale as simple power laws. Equally surprising is that they scale sublinearly as functions of their size, rather than superlinearly like socioeconomic metrics in cities. In this sense, companies are much more like organisms than cities. The scaling exponent for companies is around 0.9, to be compared with 0.85 for the infrastructure of cities and 0.75 for organisms. (Page 32)

Similarly, for large animals, the need to dissipate heat generated by their metabolism and physical activity can become problematic because the surface area through which it is dissipated is proportionately much smaller relative to their volume than for smaller ones. Elephants, for example, have solved this challenge by evolving disproportionately large ears to significantly increase their surface area so as to dissipate more heat. (Page 42)

The pace of biological life decreases systematically and predictably with increasing size: large mammals live longer, take longer to mature, have slower heart rates, and have cells that work less hard than those of small mammals, all to the same predictable degree. Doubling the mass of a mammal increases all of its timescales such as its life span and time to maturity by about 25 percent on average and, concomitantly, decreases all rates, such as its heart rate, by the same amount. (Page 94)

Quite analogously, many of the infrastructural networks in cities are also space filling: for example, the terminal units or end points of the utility networks-gas, water, and electricity-have to end up supplying all of the various buildings that constitute a city. The pipe that connects your house to the water line in the street and the electrical line that connects it to the main cable are analogs of capillaries, while your house can be thought of as an analog to cells. Similarly, all employees of a company, viewed as terminal units, have to be supplied by resources (wages, for example) and information through multiple networks connecting them with the CEO and the management. (Page 113)

This simply means that the terminal units of a given network design, such as the capillaries of the circulatory system that we just discussed, all have approximately the same size and characteristics regardless of the size of the organism. (Page 113)

Although a blue whale's aorta is almost a foot in diameter (30 cm), its capillaries are still pretty much the same size as yours and mine. This is an explicit example of the invariance of the terminal units in these networks. (Page 119)

The critical take-home message from this section is that sublinear scaling and the associated economies of scale arising from optimizing network performance lead to bounded growth and the systematic slowing of the pace of life. (Page 173)

This is huge and therein lies our problem. If global warming induces a temperature increase of around 2°C, which it is on track to do, then the pace of almost all biological life across all scales will increase by a whopping 20 percent to 30 percent. (Page 177)

I remind you that a modest 2°C decrease in body temperature can result in a 20 percent to 30 percent increase in life span. So if you were able to artificially lower your body temperature by just 1°C (that's about 1.8°F) you could enhance your life span by about 10 percent to 15 percent. The hitch is that you would have to do this for your entire life in order to reap the "benefits." But more saliently, significantly lowering body temperature may well have many other deleterious, potentially life-threatening outcomes. As I have stressed earlier, changing just one component of a complex adaptive system without fully understanding its multilevel spatiotemporal dynamics usually leads to unintended consequences. (Page 204)

The 2,000 food calories a day you need to stay alive is equivalent to almost 100 watts, the power of a lightbulb. You are extraordinarily efficient in your use of energy relative to anything that is man-made. Your dishwasher, for example, requires more than ten times more energy per second than you do just to wash dishes, while your car uses it at a rate in excess of a thousand times more just to move you around. When you add up all the energy an average human being on the planet uses to fuel all of the machinery, artifacts, and infrastructure integral to modern life it comes to about thirty times the rate of our natural energy requirements. (Page 234)

Macroeconomically, cities are the prime drivers of economic development, not the nation-state as is typically presumed by most classical economists. (Page 262)

Each gas station in a larger city serves more people and consequently sells more fuel per month than in a smaller one. To put it slightly differently, with each doubling of population size, a city needs only about 85 percent more gas stations-and not twice as many as might naively be expected-so there is a systematic savings of about 15 percent with each doubling. (Page 272)

To approximately the same degree as for the positive indicators, negative indicators of human social behavior also systematically increase with city size: doubling the size of a city not only increases wages, wealth, and innovation by approximately 15 percent per capita but also increases the amount of crime, pollution, and disease to the same degree. Apparently, the good, the bad, and the ugly come together hand in glove as an integrated, almost predictable package. (Page 278)

Consequently, all of the socioeconomic metrics that reflect such activity and which were discussed earlier when reviewing urban scaling laws are proportional to the number of links, or interactions that take place, between people within the city. (Page 316)

Instead of giving us more time, "science and compound interest" driven by "technologists working for fifty hours a week" have, in fact, given us less time. The multiplicative compounding of socioeconomic interactivity engendered by urbanization has inevitably led to the contraction of time. Rather than being bored to death, our actual challenge is to avoid anxiety attacks, psychotic breakdowns, heart attacks, and strokes resulting from being accelerated to death. (Page 332) ‍

We tend to spend about an hour each day traveling, whoever and wherever we are. Roughly speaking, the average commute time from home to work is about half an hour each way independent of the city or means of transportation. (Page 333)

Because walking speed is about 5 kilometers an hour, the typical extent of a "walking city" is about 5 kilometers across (about 3 miles), corresponding to an area of about 20 square kilometers (about 7 square miles). According to Marchetti, "There are no city walls of large, ancient cities (up to 1800), be it Rome or Persepolis, which have a diameter greater than 5km or a 2.5km radius. Even Venice today, still a pedestrian city, has exactly 5km as the maximum dimension of the connected center." With the introduction of horse tramways and buses, electric and steam trains, and ultimately automobiles, the size of cities could grow but, according to Marchetti, constrained by the onehour rule. With cars able to travel at 40 kilometers an hour (25 mph), cities, and more generally metropolitan areas, could expand to as much as 40 kilometers or 25 miles across, which is typical of the catchment area for most large cities. This corresponds to an area of about 12 hectares or 450 square miles, more than fifty times the area of a walking city. (Page 334)

A major innovation that might have taken hundreds of years to evolve a thousand or more years ago may now take only thirty years. Soon it will have to take twenty-five, then twenty, then seventeen, and so on, and like Sisyphus we are destined to go on doing it, if we insist on continually growing and expanding. The resulting sequence of singularities, each of which threatens stagnation and collapse, will continue to pile up, leading to what mathematicians call an essential singularity-a sort of mother of all singularities. (Page 424)

Happy Accidents by Morton A Meyers

The Beginning of Infinity by David Deutsch