The Science of Getting Rich by Wallace D. Wattles 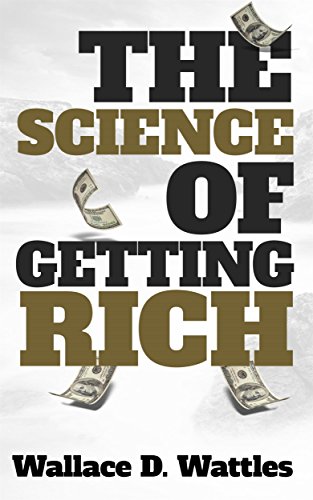 The Science of Getting Rich by Wallace D. Wattles

Focus your mind and energies and develop an abundance mindset and you will become rich. Many of the ideas in this book were warped into ideologies like The Secret, but the underlying concepts here are good. I’d recommend “As a Man Thinketh” and some Stoicism instead, though.

The book discusses the high-level psychological foundation of getting rich. As the author says:

“Whatever may be said in praise of poverty, the fact remains that it is not possible to live a really complete or successful life unless one is rich.”

But first, we have to define “rich.” He says:

“The man who owns all he wants for the living of all the life he is capable of living is rich; and no man who has not plenty of money can have all he wants.”

So different people will have different ideas of what it means to be rich, but at the very least, you must be able to do everything you want to do.

After a bit more exposition, he gets to the first major argument:

“Thought is the only power, which can produce tangible riches from the Formless Substance. The stuff from which all things are made is a substance, which thinks, and a thought of form in this substance produces the form.”

This is similar to the ideas in “As a Man Thinketh.” Essentially, all richness starts in your thoughts, so you must properly direct those first.

“There is a thinking stuff from which all things are made, and which, in its original state, permeates, penetrates, and fills the interspaces of the universe. A thought, in this substance, produces the thing that is imaged by the thought. Man can form things in his thought, and, by impressing his thought upon formless substance, can cause the thing he thinks about to be created.”

This is where you start to see how people can take the idea too far and end up believing in The Secret. The point isn’t so much that you can will success into your life, rather, that you must first direct your thoughts towards it. That’s how I read it, at least.

“You are to become a creator, not a competitor; you are going to get what you want, but in such a way that when you get it every other man will have more than he has now.”

Focus on creation, not on beating people. Be your best self, and in doing so, help others be better.

“Remember, if you are to become rich in a scientific and certain way, you must rise entirely out of the competitive thought. You must never think for a moment that the supply is limited.”

Abundance mindset, focus on seeing the world’s resources as abundant, not limited, and you can have more of the creator mindset.

“Give every man more in use value than you take from him in cash value; then you are adding to the life of the world by every business transaction.”

This is where some of the ideas around “vision boards” come from. People get too wrapped up in the idea of visualizing their goals, instead of acting on them, and create these elaborate pillars to devote themselves to. Maybe this is what the author meant… but I think he more meant setting clear goals for yourself.

“To set about getting rich in a scientific way, you do not try to apply your will power to anything outside of yourself. Your have no right to do so, anyway.”

This is similar to the notion of “Direct Actions” from “How I Found Freedom in an Unfree World,” as well as one of the general ideas of stoicism. Essentially, don’t focus on things outside of your control. It’s a waste of time and energy.

“In order to master your environment and your destiny, it is not at all necessary that you should rule over your fellow men and indeed, when you fall into the world’s struggle for the high places, you begin to be conquered by fate and environment, and your getting rich becomes a matter of chance and speculation.”

Again, more focus on what you can control, and ignoring the things you cannot.