To Sell is Human by Dan Pink 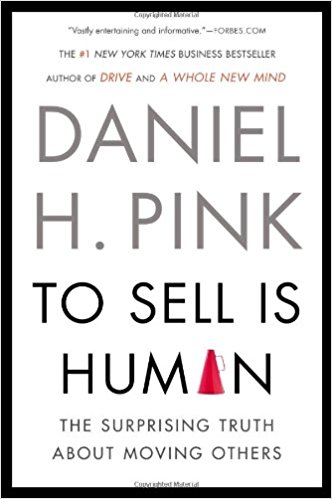 To Sell is Human by Dan Pink

Useful insights on how to sell in a world with information equality, especially for people who generally don’t like “Selling” (like me). Also lays out the argument that everyone has to become a salesperson of some type now if they wish to advance.

“Attunement is the ability to bring one’s actions and outlook into harmony with other people and with the context you’re in.”

“Start your encounters with the assumption that you’re in a position of lower power. That will help you see the other side’s perspective more accurately, which, in turn, will help you move them.”

“Once positive emotions outnumbered negative emotions by 3 to 1— that is, for every three instances of feeling gratitude, interest, or contentment, they experienced only one instance of anger, guilt, or embarrassment— people generally flourished. Those below that ratio usually did not. But Fredrickson and Losada also found that positivity had an upper limit. Too much can be as unproductive as too little. Once the ratio hit about 11 to 1, positive emotions began doing more harm than good. Beyond that balance of positive-to-negative, life becomes a festival of Panglossian cluelessness, where self-delusion suffocates self-improvement. Some negativity— what Fredrickson and Losada call “appropriate negativity”— is essential. Without it, “behavior patterns calcify.” Negative emotions offer us feedback on our performance, information on what’s working and what’s not, and hints about how to do better.”

““the contrast principle.” We often understand something better when we see it in comparison with something else than when we see it in isolation. In his work over the past three decades, Cialdini has recast how both academics and practitioners understand the dynamics of influencing others. And one of his core insights is that contrast operates within, and often amplifies, every aspect of persuasion. That’s why the most essential question you can ask is this: Compared to what? You can raise that question by framing your offering in ways that contrast with its alternatives and therefore clarify its virtues. The academic literature on framing is vast and sometimes conflicting. But the following five frames can be useful in providing clarity to those you hope to move.”

“People often find potential more interesting than accomplishment because it’s more uncertain, the researchers argue. That uncertainty can lead people to think more deeply about the person they’re evaluating— and the more intensive processing that requires can lead to generating more and better reasons why the person is a good choice. So next time you’re selling yourself, don’t fixate only on what you achieved yesterday. Also emphasize the promise of what you could accomplish tomorrow.”

“Using Pantalon’s approach, you wouldn’t say, “Young lady, you must study,” or “Please, please, please study for the test.” Instead, you’d ask her two questions. Question 1. “On a scale of 1 to 10, with 1 meaning ‘not the least bit ready’ and meaning ‘totally ready,’ how ready are you to study?” After she offers her answer, move to: Question 2. “Why didn’t you pick a lower number?” “This is the question that catches everybody off guard,” Pantalon writes in his book Instant Influence.”

“They call their technique “Five Whys.” It works like this: When you want to figure out what kind of problem someone has, ask a “Why?” question. Then, in response to the answer, ask another “Why?” And again and again, for a total of five whys.

“A pecha-kucha presentation contains twenty slides, each of which appears on the screen for twenty seconds. That’s it. The rules are rigid, which is the point. It’s not nineteen slides or twenty-one seconds. It’s 20 x 20.”

Getting Everything You Can Out of All You’ve Got