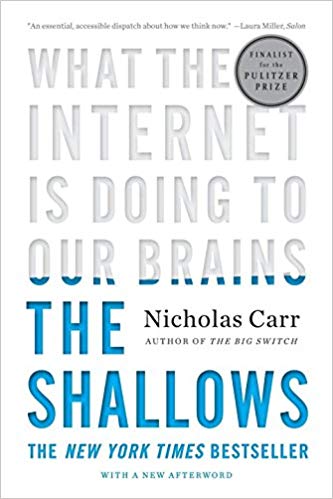 An interesting, and somewhat frightening overview of how our brains are being shaped by the Internet. A compelling case for spending less time “surfing.”

“Descartes may have been wrong about dualism, but he appears to have been correct in believing that our thoughts can exert a physical influence on, or at least cause a physical reaction in, our brains. We become, neurologically, what we think.”

“Should the Egyptians learn to write, Thamus goes on, “it will implant forgetfulness in their souls: they will cease to exercise memory because they rely on that which is written, calling things to remembrance no longer from within themselves, but by means of external marks.””

“Even as the technology of the book sped ahead, the legacy of the oral world continued to shape the way words on pages were written and read. Silent reading was largely unknown in the ancient world. The new codices, like the tablets and scrolls that preceded them, were almost always read aloud, whether the reader was in a group or alone. In a famous passage in his Confessions, Saint Augustine described the surprise he felt when, around the year AD 380, he saw Ambrose, the bishop of Milan, reading silently to himself. “When he read, his eyes scanned the page and his heart explored the meaning, but his voice was silent and his tongue was still,” wrote Augustine. “Often, when we came to see him, we found him reading like this in silence, for he never read aloud.” Baffled by such peculiar behavior, Augustine wondered whether Ambrose “needed to spare his voice, which quite easily became hoarse.””

“The natural state of the human brain, like that of the brains of most of our relatives in the animal kingdom, is one of distractedness. Our predisposition is to shift our gaze, and hence our attention, from one object to another, to be aware of as much of what’s going on around us as possible. Neuroscientists have discovered primitive “bottom-up mechanisms” in our brains that, as the authors of a 2004 article in Current Biology put it, “operate on raw sensory input, rapidly and involuntarily shifting attention to salient visual features of potential importance.””

“Whenever we turn on our computer, we are plunged into an “ecosystem of interruption technologies,” as the blogger and science fiction writer Cory Doctorow terms it.”

“when we go online, we enter an environment that promotes cursory reading, hurried and distracted thinking, and superficial learning. It’s possible to think deeply while surfing the Net, just as it’s possible to think shallowly while reading a book, but that’s not the type of thinking the technology encourages and rewards.”

“The Net’s interactivity gives us powerful new tools for finding information, expressing ourselves, and conversing with others. It also turns us into lab rats constantly pressing levers to get tiny pellets of social or intellectual nourishment.”

“We usually make better decisions, his experiments reveal, if we shift our attention away from a difficult mental challenge for a time. But Dijksterhuis’s work also shows that our unconscious thought processes don’t engage with a problem until we’ve clearly and consciously defined the problem. If we don’t have a particular intellectual goal in mind, Dijksterhuis writes, “unconscious thought does not occur.””

““Our results suggest that learning facts and concepts will be worse if you learn them while you’re distracted,””

“What we’re experiencing is, in a metaphorical sense, a reversal of the early trajectory of civilization: we are evolving from being cultivators of personal knowledge to being hunters and gatherers in the electronic data forest.”

“Intensive multitaskers are “suckers for irrelevancy,” commented Clifford Nass, the Stanford professor who led the research. “Everything distracts them.” Michael Merzenich offers an even bleaker assessment. As we multitask online, he says, we are “training our brains to pay attention to the crap.” The consequences for our intellectual lives may prove “deadly.””

“‘Sir, the reason is very plain. Knowledge is of two kinds. We know a subject ourselves, or we know where we can find information upon it.’””

““In sum,” concluded the researchers, “simple and brief interactions with nature can produce marked increases in cognitive control.” Spending time in the natural world seems to be of “vital importance” to “effective cognitive functioning.””

The Inevitable by Kevin Kelly

The Acceleration of Addictiveness by Paul Graham