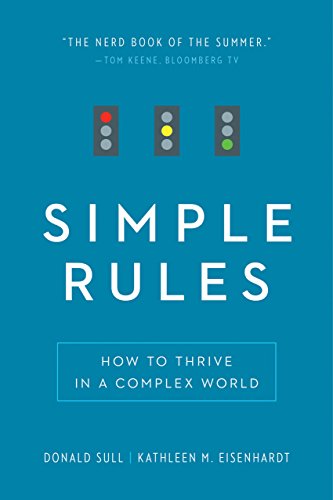 Absolutely essential concept, and one that I’ve been a fan of for a while. The book is useful in exploring simple rules and giving examples, but I get the sense they padded it a bit because it could be much shorter. You can get most of it from my notes, but I’d recommend picking up a copy to go deeper on the concepts.

This concept reminds me of commander’s intent in the military. In a changing environment you can’t have too rigid of a plan, so some basic goal with the existing rules and training can allow for success and rough coordination despite chaos.

“Simple rules work, it turns out, because they do three things very well. First, they confer the flexibility to pursue new opportunities while maintaining some consistency. Second, they can produce better decisions. When information is limited and time is short, simple rules make it fast and easy for people, organizations, and governments to make sound choices. They can even outperform complicated decision-making approaches in some situations. Finally, simple rules allow the members of a community to synchronize their activities with one another on the fly.”

Creating Simple Rules for yourself:

“The process of developing personal rules, like its professional counterpart, consists of three steps: (1) decide what will move your personal needles and increase the gap between what energizes you and what stresses you out, (2) identify a bottleneck that keeps you from creating personal value, and (3) develop simple rules that work for you.”

Questions to ask to find what will move the needle:

Getting Results the Agile Way by J.D. Meier

The Effective Executive by Peter Drucker

The Motivation Hacker by Nick Winter

Manage Your Day-to-Day by Jocelyn Glei