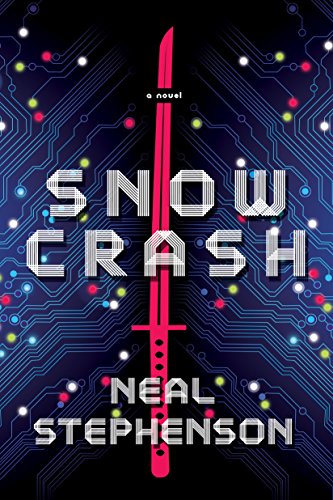 At the time I’m sure this reality seemed much more far-flung than it does now, but it remains a prescient look at what the emerging VR/AR Metaverse could be like (and a great story to go with it!)

“Vitaly owns half a carton of Lucky Strikes, an electric guitar, and a hangover.”

“The world is full of power and energy and a person can go far by just skimming off a tiny bit of it.”

“It was, of course, nothing more than sexism, the especially virulent type espoused by male techies who sincerely believe that they are too smart to be sexists.”

“He gets a little bit scared, but he likes being scared, to him it is the same thing as being excited. Really, he has only two emotions: sleeping and adrenaline overdrive.”

““All destined to wear blazers and shuffle papers in suburbia. You don’t respect those people very much, Y.T., because you’re young and arrogant. But I don’t respect them much either, because I’m old and wise.””

“Hiro puts his head in his hands. He’s not exactly thinking about this; he’s letting it ricochet around in his skull, waiting for it to come to rest.”

“Until a man is twenty-five, he still thinks, every so often, that under the right circumstances he could be the baddest motherfucker in the world.”

“this is just like life must be for about 99 percent of the people in the world. You’re in this place. There’s other people all around you, but they don’t understand you and you don’t understand them, but people do a lot of pointless babbling anyway. In order to stay alive, you have to spend all day every day doing stupid meaningless work.”

“Jokes. Urban legends. Crackpot religions. Marxism. No matter how smart we get, there is always this deep irrational part that makes us potential hosts for self-replicating information.”

“This is one of these utterly simple and obvious questions that is irritating because Hiro’s not sure of the answer.”

From about the author: “Despite the tremendous amounts of time he devotes to writing, playing with computers, listening to speed metal, Rollerblading, and pounding nails, he is a flawless husband, parent, neighbor, and all-around human being.”