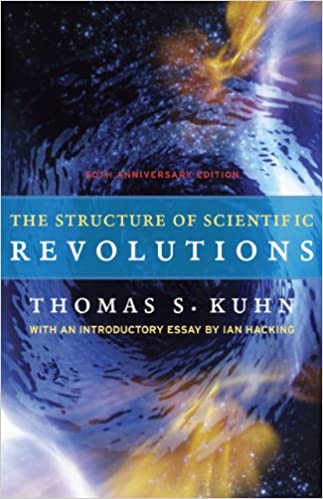 The beginning and end are fantastic for getting a better grip on how science is done, and understanding how it moves in cycles more than linear progress. The middle dragged a bit.

If these outof-date beliefs are to be called myths, then myths can be produced by the same sorts of methods and held for the same sorts of reasons that now lead to scientific knowledge. If, on the other hand, they are to be called science, then science has included bodies of belief quite incompatible with the ones we hold today. Given these alternatives, the historian must choose the latter. Out-of-date theories are not in principle unscientific because they have been discarded. (Page 3)

Normal science, the activity in which most scientists inevitably spend almost all their time, is predicated on the assumption that the scientific community knows what the world is like. Much of the success of the enterprise derives from the community's willingness to defend that assumption, if necessary at considerable cost. Normal science, for example, often suppresses fundamental novelties because they are necessarily subversive of its basic commitments. (Page 5)

when it does-when, that is, the profession can no longer evade anomalies that subvert the existing tradition of scientific practice-then begin the extraordinary investigations that lead the profession at last to a new set of commitments, a new basis for the practice of science. The extraordinary episodes in which that shift of professional commitments occurs are the ones known in this essay as scientific revolutions. (Page 6)

'normal science' means research firmly based upon one or more past scientific achievements, achievements that some particular scientific community acknowledges for a time as supplying the foundation for its further practice. (Page 10)

Their achievement was sufficiently unprecedented to attract an enduring group of adherents away from competing modes of scientific activity. Simultaneously, it was  sufficiently open-ended to leave all sorts of problems for the redefined group of practitioners to resolve. Achievements that share these two characteristics I shall henceforth refer to as 'paradigms, (Page 10)

Because the crafts are one readily accessible source of facts that could not have been casually discovered, technology has often played a vital role in the emergence of new sciences. (Page 16)

To be accepted as a paradigm, a theory must seem better than its competitors, but it need not, and in fact never does, explain all the facts with which it can be confronted. (Page 18)

a paradigm is rarely an object for replicațion. Instead, like an accepted judicial decision in the common law, it is an object for further articulation and specification under new or more stringent conditions. (Page 23)

Paradigms gain their status because they are more successful than their competitors in solving a few problems that the group of practitioners has come to recognize as acute. (Page 24)

These three classes of problems-determination of significant fact, matching of facts with theory, and articulation of theory-exhaust, I think, the literature of normal science (Page 34)

extraordinary problems are not to be had for the asking. They emerge only on special occasions prepared by the advance of normal research. Inevitably, therefore, the overwhelming majority of the problems undertaken by even the very best scientists usually fall into one of the three categories outlined above. (Page 34)

Bringing a normal research problem to a conclusion is achieving the anticipated in a new way, and it requires the solution of all sorts of complex instrumental, conceptual, and mathematical puzzles. The man who sucçeeds proves himself an expert puzzle-solver, and the challenge of the puzzle is an important part of what usually drives him on. (Page 36)

the really pressing problems, e.g., a cure for cancer or the design of a lasting peace, are often not puzzles at all, largely because they may have no solution. (Page 37)

The scientific enterprise as a whole does from time to time prove useful, open up new territory, display order, and test long-accepted belief. Nevertheless, the individual engaged on a normal research problem is almost never doing any one of these things. (Page 38)

So long as the tools a paradigm supplies continue to prove capable of solving the problems it defines, science moves fastest and penetrates most deeply through confident employment of those tools. The reason is clear. As in manufacture so in science-retooling is an extravagance to be reserved for the occasion that demands it. The significance of crises is the indication they provide that an occasion for retooling has arrived. (Page 76)

once it has achieved the status of paradigm, a scientific theory is declared invalid only if an alternate candidate is available to take its place. (Page 77)

Once a first paradigm through which to view nature has been found, there is no such thing as research in the absence of any paradigm. To reject one paradigm without simultaneously substituting another is to reject science itself. (Page 79)

When paradigms enter, as they must, into a debate about paradigm choice, their role is necessarily circular. Each group uses its own paradigm to argue in that paradigm's defense. (Page 94)

when paradigms change, the world itself changes with them. Led by a new paradigm, scientists adopt new instruments and look in new places. Even more important, during revolutions scientists see new and different things when looking with familiar instruments in places they have looked before. (Page 111)

What were ducks in the scientist's world before the revolution are rabbits afterwards. (Page 112)

Scientists are not, of course, the only group that tends to see its discipline's past developing linearly toward its present vantage. The temptation to write history backward is both omnipresent and perennial. But scientists are more affected by the temptation to rewrite history, partly because the results of scientific research show no obvious dependence upon the historical context of the inquiry, and partly because, except during crisis and revolution, the scientist's contemporary position seems so secure, (Page 137)

But paradigm debates are not really about relative problem-solving ability, though for good reasons they are usually couched in those terms. Instead, the issue is which paradigm should in the future guide research on problems many of which neither competitor can yet claim to resolve completely. (Page 156)

The net result of a sequence of such revolutionary selections, separated by periods of normal research, is the wonderfully adapted set of instruments we call modern scientific knowledge. Successive stages in that developmental process are marked by an increase in articulation and specialization. And the entire process may have occurred, as we now suppose biological evolution did, without  benefit of a set goal, a permanent fixed scientific truth, of which each stage in the development of scientific knowledge is a better exemplar. (Page 172)

Happy Accidents by Morton A Meyers