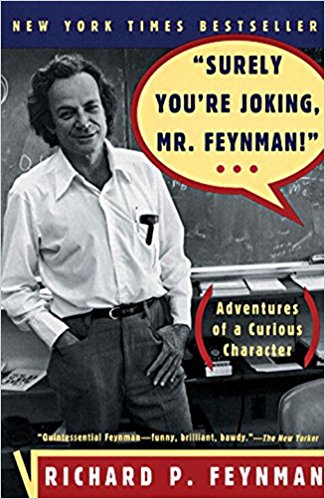 This book sneaks up on you. You’re reading these fun stories about Feynman’s life, and then you look back and realize you learned about the scientific process along the way. Extremely readable, packed with wisdom, and fun!

“That’s a puzzle drive. It’s what accounts for my wanting to decipher Mayan hieroglyphics, for trying to open safes. I remember in high school, during first period a guy would come to me with a puzzle in geometry, or something which had been assigned in his advanced math class. I wouldn’t stop until I figured the damn thing out— it would take me fifteen or twenty minutes. But during the day, other guys would come to me with the same problem, and I’d do it for them in a flash. So for one guy, to do it took me twenty minutes, while there were five guys who thought I was a super-genius.”

““Hell, I don’t know. We didn’t talk well enough!” But I don’t have to know. It’s just fun, seeing what’s going to happen; it’s an adventure! The other guy’s afraid, so he says no. So I take the two girls in a taxi to the hotel, and discover that there’s a dance organized by the deaf and dumb, believe it or not. They all belonged to a club. It turns out many of them can feel the rhythm enough to dance to the music and applaud the band at the end of each number.”

“I don’t know what’s the matter with people: they don’t learn by understanding; they learn by some other way— by rote, or something. Their knowledge is so fragile!”

“But you have to have absolute confidence. Keep right on going, and nothing will happen.”

“Learn what the rest of the world is like. The variety is worthwhile.”

“So I found hypnosis to be a very interesting experience. All the time you’re saying to yourself, “I could do that, but I won’t”— which is just another way of saying that you can’t.”

“They had wasted all their time memorizing stuff like that, when it could be looked up in fifteen minutes.”

“It was such a shock to me to see that a committee of men could present a whole lot of ideas, each one thinking of a new facet, while remembering what the other fella said, so that, at the end, the decision is made as to which idea was the best— summing it all up— without having to say it three times. These were very great men indeed.”

“After a lot of investigation, I finally figured out that the students had memorized everything, but they didn’t know what anything meant. When they heard “light that is reflected from a medium with an index,” they didn’t know that it meant a material such as water. They didn’t know that the “direction of the light” is the direction in which you see something when you’re looking at it, and so on. Everything was entirely memorized, yet nothing had been translated into meaningful words. So if I asked, “What is Brewster’s Angle?” I’m going into the computer with the right keywords. But if I say, “Look at the water,” nothing happens— they don’t have anything under “Look at the water!””

““Well, did you ever ask them?” “Oh! I never thought of that.” The next girl I met that I wanted to pose for me was a Caltech student. I asked her if she would pose nude. “Certainly,” she said, and there we were! So it was easy. I guess there was so much in the back of my mind that I thought it was somehow wrong to ask. I’ve done a lot of drawing by now, and I’ve gotten so I like to draw nudes best. For all I know it’s not art, exactly; it’s a mixture. Who knows the percentages?”

“The first principle is that you must not fool yourself— and you are the easiest person to fool. So you have to be very careful about that. After you’ve not fooled yourself, it’s easy not to fool other scientists. You just have to be honest in a conventional way after that.”

“So I have just one wish for you— the good luck to be somewhere where you are free to maintain the kind of integrity I have described, and where you do not feel forced by a need to maintain your position in the organization, or financial support, or so on, to lose your integrity. May you have that freedom.”