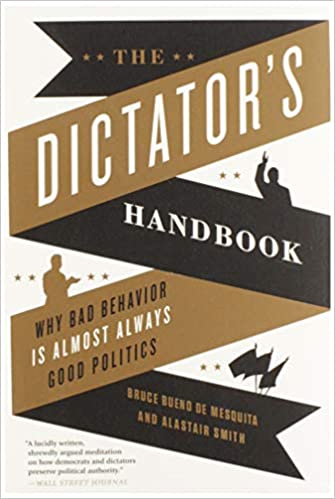 An excellent book on political incentives. It will make you see politics and politicians in a whole new light, similar to the effect from reading 48 Laws of Power.

First, politics is about getting and keeping political power. It is not about the general welfare of "We, the people."

Second, political survival is best assured by depending on few people to attain and retain office. That means dictators, dependent on a few cronies, are in a far better position to stay in office for decades, often dying in their sleep, than are democrats.

Third, when the small group of cronies knows that there is a large pool of people waiting on the sidelines, hoping to replace them in the queue for gorging at the public trough, then the top leadership has great discretion over how revenue is spent and how much to tax. All that tax revenue and discretion opens the door to kleptocracy from many leaders, and public-spirited programs from a very few. And it means enhanced tenure in power.

Fourth, dependence on a small coalition liberates leaders to tax at high rates, just as was true in Bell. (Page 1)

the interchangeables in Bell consisted of 9,395 registered voters; the influentials, the 2,235 who actually voted; and the essentials, not more than the 473 voters whose support was essential to win a seat on the city council. (Page 7)

Managing the interchangeables, influentials, and essentials to that end is the act, art, and science of governing. (Page 11)

Rule 1: Keep your winning coalition as small as possible. (Page 17)

Rule 2: Keep your nominal selectorate as large as possible. Maintain a large selectorate of interchangeables and you can easily replace any troublemakers in your coalition, influentials and essentials alike. (Page 17)

Rule 3: Control the flow of revenue. It's always better for a ruler to determine who eats than it is to have a larger pie from which the people can feed themselves. (Page 18)

Rule 4: Pay your key supporters just enough to keep them loyal. Remember, your backers would rather he you than be dependent on you. (Page 18)

Rule 5: Don't take money out of your supporter's pockets to make the people's lives better. (Page 18)

Why, for example, does Congress gerrymander districts? Precisely because of Rule 1: Keep the coalition as small as possible.Why do some political parties favor immigration? Rule 2: Expand the set of interchangeables.Why are there so many battles over the tax code? Rule 3: Take control of the sources of revenue.Why do Democrats spend so much of that tax money on welfare and social programs? Or why on earth do we have earmarks? Rule 4: Reward your essentials at all costs.Why do Republicans wish the top tax rate were lower, and have so many problems with the idea of national health care? Rule 5: Don't rob your supporters to give to your opposition. (Page 19)

Putting more outsiders on a board translates on into better returns for shareholders, a benefit to everyone. At average the same time, it also translates into greater risk for the CEO. Since the CEO's interest is rarely the same as the shareholder's interest, CEOS prefer to avoid outsider board members if they can. (Page 52)

Saddam Hussein's biographer asked Saddam about the decision to eliminate these people, most of whom had risen in the ranks of the Ba'ath Party with Saddam's support. He reports, "The answer was that as long as there is a revolution, there will be a counter-revolution." As we said before, those who can bring a leader to power can also bring the leader down. It is best to shrink the ranks of those who represent a threat and keep those who are most trusted to be loyal. (Page 59)

Designated seats for underrepresented minorities is another means by which leaders reduce the number of people upon whom they are dependent. Such policies are advertised as empowering minorities, whether they are women, or members of a particular caste or religion. In reality they empower leaders. That a candidate is elected by a small subset of the population reduces the number of essentials required to retain power. (Page 67)

For many leaders, corruption is not something bad that needs to be eliminated. Rather it is an essential political tool. Leaders implicitly or sometimes even explicitly condone corruption. Effectively they license the right to extract bribes from the citizens. This avoids the administrative headache of organizing taxation and transferring the funds to supporters. (Page 88)

once a state profits from mineral wealth, it is unlikely to democratize. The easiest way to incentivize the leader to liberalize policy is to force him to rely on tax revenue to generate funds. Once this happens, the incumbent can no longer suppress the population because the people won't work if he does. (Page 91)

Debt forgiveness with the promise of subsequent democratization never works. An autocrat might be sincere in his willingness to have meaningful elections in return for funds. Yet once the financial crisis is over and the leader can borrow to pay off the coalition, any promised election will be a sham. For democrats, debt relief, while helpful, is unnecessary. By eliminating debt relief for autocrats we can help precipitate the sorts of rebellions seen in the Middle East in 2011, rebellions that, as discussed later, may very well open the door to better governments in the future. (Page 98)

dependence on a large coalition of essentials is a powerful explanation of quality of life even when wealth is absent, just as it seems to be a harbinger of future wealth. Economic growth and success, in contrast, does not seem to be an assurance of improved governance and, indeed, may hinder it. (Page 107)

If an aspiring leader won't do terrible things, they can be sure that there are plenty of others who will. And if they don't pay their backers to do terrible things, they can be pretty confident that those cronies will be bought off, exchanging terrible deeds for riches and power.[[Genghis Khan]] (1162-1227) understood this principle. If he came across a town that did not immediately surrender to him, he killed everyone that lived there, and then made sure the next town knew he had done so. That way, in aggregate, he didn't actually have to slaughter that many townspeople. (Page 129)

[[Julius Caesar]]'s death at the hands of some of his closest supporters is often portrayed as the slaying of a despot. But the facts don't support this interpretation.Julius Caesar was a reformer. He undertook important public works, from redoing the calendar and relieving traffic congestion, to stabilizing food availability. He also took steps specifically designed to help the poor. For instance, he provided land grants to former soldiers and got rid of the system of tax farming, replacing it with a more orderly and predictable tax system. Not only that, he relieved the ple's debt burden by about 25 percent.Not surprisingly, though these policies were popular with the people, many came at the expense of Rome's prominent citizens. (Page 151)

It is fine for leaders to enrich the people's lives, but it has to come out of the leader's pocket, not the coalition's. (Page 152)

Buying policy from a democracy is expensive because many people need to be compensated for their dislike of the policy. Buying policies from autocracies is quite a bit easier. (Page 170)

NGOS are most successful at providing basic public goods like primary education and basic health care services even autocrats want. When aid funds are used to substitute for government spending, then few, maybe even no one, has actually been helped unless the government uses the freed-up money for other projects of benefit to the general population. Of course, they don't. (Page 183)

Democrats prefer compliant foreign regimes to democratic ones. Democratic interventionists, while proclaiming to be using military force to pursue democratization, have a profound tendency to reduce the degree of democracy in their targets, while increasing policy compliance by easily purchased autocrats. (Page 183)

Democrats more often than autocrats fight when all other means of gaining policy concessions from foreign foes fail. In contrast, autocrats are more likely to fight casually, in the pursuit of land, slaves, and treasure. (Page 237)

A man always has two reasons for doing anything: a good reason and the real reason. -J. P. MORGAN (Page 251)

The Packers are the only nonprofit, community-owned franchise in American major league professional sports. Their 112,120 shareholders are mainly local fans. The ownership rules preclude a small clique taking control of the team. No one is allowed to own more than 200,000 shares in the Packers and there are about 4.75 million shares outstanding. Thus, a tiny band of owners cannot easily overturn the many and run the team for their personal gain at the expense of the larger, small-owners fan base. The Packers have a forty-three-member board of directors. (Page 261)

We have learned that just about all of political life revolves around the size of the selectorate, the influentials, and the winning coalition. Expand them all, and the interchangeables no more quickly than the coalition, and everything changes for the better for the vast majority of people. (Page 281)