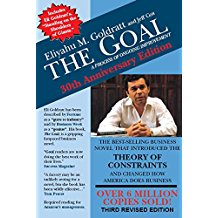 Very much a “zero to one” book, where after you read it you see the world differently. Extremely helpful meta-tactic for evaluating how to improve systems, and I wish I had read it sooner.

The three most important areas of focus:

The Goal: Increase throughput while simultaneously reducing both inventory and operating expense.

If you don’t know what the real goal is, which you could very well be wrong about, then you can’t figure out what to do to reach the goal. And the goal of any business is to make money.

Keeping people working and making money aren’t the same thing. Just because you’re paying for someone doesn’t mean they should be busy all the time, it could be harmful.

Those money making measurements are difficult to use day to day though, so you can use:

The Goal Reframed: Increase throughput while simultaneously reducing both inventory and operating expense. Not to do them in isolation, but to do them all together.

If you keep everyone and everything working at full capacity, you’ll naturally build up inventory by creating excess work. A plant where everyone is working all the time is very inefficient. You can’t have a “balanced plant” without doing excess work.

Because of dependent events and statistical fluctuations, you’ll naturally run into bottlenecks in the system, kind of like the fattest kid on a hike slowing everyone down. The whole system only moves as fast as the bottleneck, so it makes sense to focus on increasing the bottleneck’s capacity, and tying the rest of the system’s rate to the rate of the bottleneck. In the analogy, put the fat kid at the front of the line, and make his backpack as light as possible so he can walk faster.

Since output can only deviate up to the maximum level determined by its dependent events, but it can deviate down much lower, with successive dependent events you’ll get further and further negative fluctuations. A kid can come to a halt, but he can only catch up as much as the kid in front of him, he can never catch up past the point the previous kid has already walked.

In most cases you’ll have capacity that is hidden from you because some of your thinking is incorrect. The first thing you should always do is see exactly how the bottlenecks are currently operating, and if you can change how they’re used to increase their capacity (before simply hiring or buying more tools). [152]

If you lose even one hour on the bottleneck, you have lost it forever. You can’t get it back somewhere else in the system. Your throughput for the entire system will be lower by whatever amount the bottleneck produces in that time. [153]

You can increase the capacity of the bottleneck by: [159]

When you make a non-bottleneck do more work than the bottleneck, you create excess inventory and thus lose money. [210]

What you have to do is figure out how to release materials at the start of the process exactly according to the capacity of the bottleneck. [216]

If you reduce your batch size, you increase throughput by reducing inventory held and reducing the amount of cash tied up at any one time. It also lets you move faster, since the gaps will be smaller since the time to process a batch will be lowered as well, and your total lead time on any project condenses. [232]

Three simple questions: What to change, what to change to, and how to cause the change. [337]