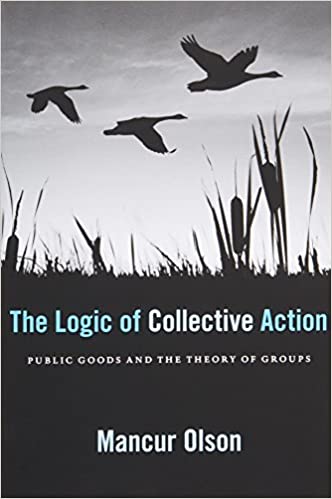 Some interesting ideas on how we work in groups, but I didn't get that much out of it.

If the members of a large group rationally seek to maximize their personal welfare, they will not act to advance their common or group objectives unless there is coercion to force them to do so, or unless some separate incentive, distinct from the achievement of the common or group interest, is offered to the members of the group individually on the condition that they help bear the costs or burdens involved in the achievement of the group objectives. Nor will such large groups form organizations to further their common goals in the absence of the coercion or the separate incentives just mentioned. These points hold true even when there is unanimous agreement in a group about the common good and the methods of achieving it. (Page 2)

But despite the force of patriotism, the appeal of the national ideology, the bond of a common culture, and the indispensability of the system of law and order, no major state in modern history has been able to support itself through voluntary dues or contributions. Philanthropic contributions are not even a significant source of revenue for most countries. Taxes, compulsory payments by definition, are needed. (Page 13)

The individual member of the typical large organization is in a position analogous to that of the firm in a perfectly competitive market, or the taxpayer in the state: his own efforts will not have a noticeable effect on the situation of his organization, and he can enjoy any improvements brought about by others whether or not he has worked in support of his organization. (Page 16)

Large organizations that are not able to make membership compulsory must also provide some noncollective goods in order to give potential members an incentive to join. (Page 16)

In addition, the amounts of the collective good that a member of the group receives free from other members will further reduce his incentive to provide more of that good at his own expense. Accordingly, the larger the group, the farther it will fall short of providing an optimal amount of a collective good. (Page 35)

Once a smaller member has the amount of the collective good he gets free from the largest member, he has more than he would have purchased for himself, and has no incentive to obtain any of the collective good at his own expense. In small groups with common interests there is accordingly a surprising tendency for the "exploitation" of the great by the small. (Page 35)

The larger a group is, the farther it will fall short of obtaining an optimal supply of any collective good, and the less likely that it will act to obtain even a minimal amount of such a good. In short, the larger the group, the less it will further its common interests. (Page 36)

"We have found," he wrote, "that committees should be small when you expect action and relatively large when you are looking for points of view, reactions, etc." (Page 54)

In fact the workers were not inconsistent: their actions and attitudes were a model of rationality when they wished that everyone would attend meetings and failed to attend themselves. For if strong union is in the members' interest, they will presumably be better off if the attendance is high, but (when the fines for failure to attend meetings are not in effect) an individual worker has no economic incentive to attend a meeting. He will get the benefits of the union's achievements whether he attends meetings or not and will probably not by himself be able to add noticeably to those achievements. (Page 86)