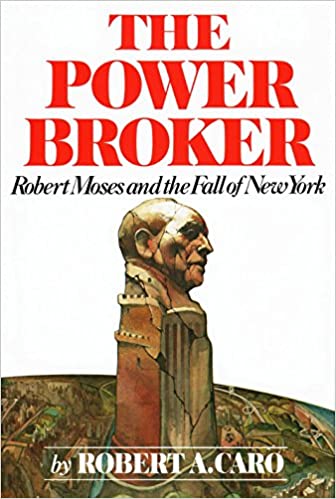 An incredible biography of Robert Moses. It can be a little slow and dense at times, but it's worth pushing through for the full story.

One must wait until the evening To see how splendid the day has been. (Page 1)

The net result of all his work was nothing. There was no civil service standardization, no great highway along the Hudson, no mothers' shelters in Central Park. Intending to reform the city, he had worked hard and mastered with a supreme mastery reform's techniques. Convinced he was right, he had refused to soil the white suit of idealism with compromise. He had really believed that if his system was right-scientific, logical, fair-and if it got a hearing, the system would be adopted. In free and open encounter would not Truth prevail? And he had gotten the hearing. But Moses had failed in his calculations to give certain factors due weight. He had not sufficiently taken into account greed. He had not sufficiently taken into account self-interest. And, most of all, he had not sufficiently taken into account the need for power. (Page 85)

He was openly scornful of men who hadn't, of men who still worried about the Truth when what counted was votes. He was openly scornful of reformers whose first concern was accuracy, who were willing to devote their lives to fighting for principle and who wanted to make that fight without compromise or surrender of any part of the ideals with which they had started it. Bob Moses was scornful, in short, of what he had been. (Page 135)

The bill Moses drafted establishing the Long Island State Park Commission provided that the term of its president-himself-would be six years, three times as long as the Governor's. And it further provided that no Governor could remove the park commission president just because the president was not following the Governor's orders. Removal, the bill provided, could only follow the filing by the Governor of detailed, specific charges of actual misconduct and a formal, public hearing, with both sides represented by counsel, on those charges. (Page 173)

Once you physically began a project, there would always be some way found of obtaining the money to complete it. "Once you sink that first stake," he would often say, "they'll never make you pull it up." (Page 218)

A third feature of Moses' office was his desk. It wasn't a desk but rather a large table. The reason was simple: Moses did not like to let problems pile up. If there was one on his desk, he wanted it disposed of immediately. Similarly, when he arrived at his desk in the morning, he disposed of the stacks of mail awaiting him by calling in secretaries and going through the stacks, letter by letter, before he went on to anything else. Having a table instead of a desk was insurance that this procedure would be followed. Since a table has no drawers, there was no place to hide papers; there was no escape from a nagging problem or a difficult-to-answer letter except to get rid of it in one way or another. And there was another advantage: when your desk was a table, you could have conferences at it without even getting up. (Page 268)

Robert Moses had always displayed a genius for adorning his creations with little details that made them fit in with their setting, that made the people who used them feel at home in them. There was a little detail on the playhouse comfort station in the Harlem section of Riverside Park that is found nowhere else in the park. The wrought-iron trellises of the park's other playhouses and comfort stations are decorated with designs like curling waves. The wrought-iron trellises of the Harlem playhouse-comfort station are decorated with monkeys. (Page 560)

After a decade and a half of building public works, the public works he had not yet built loomed before him larger than ever. (Page 619)

With that sentence in there, he had power to issue forty-year bonds and every thirty-nine years he could call them in and issue new bonds, for another forty years. La Guardia had thought that authorities . . . would be temporary creations that would build something and then turn it over to the city and go out of existence as soon as it was paid off. But with that gimmick in there, it would never be paid off." (Page 626)

For nine years, Robert Moses had been seeking control of the Tunnel Authority. Now he had control. He had been unable to prevent the construction of the Authority's Queens-Midtown and Brooklyn-Battery tunnels, but now those tunnels-and their revenues-were his. New York was a city divided by water, split by rivers and bays. Every modern water crossing within the city's borders, not only those above the water but those beneath it, not only every bridge but every tunnel constructed within the city's borders for the use of motor vehicles since 1909, was now under the control of authorities that he controlled. More important, all new water crossings would also be under his control. (Page 694)

In effect, only Moses had the money to build highways. Without sufficient engineering expertise on his own staff or sufficient money to hire outside expertise-even if any outside highway expert of stature could have been persuaded to defy Moses-not only couldn't a borough president finance a highway, he couldn't even plan an alternate route. He couldn't even examine Moses' proposal to ascertain its accuracy. He had no realistic choice but to accept it. (Page 750)

No strictly rational explanation could account for the voraciousness of that appetite. In his early days of power, he had sloughed off all hobbies and relaxations save swimming. Now, twenty-five years later, he still had no other hobbies or relaxations. (Page 807)

Lump together all the superhighways in existence in all the cities on earth in 1945, and their mileage would not add up to as many miles as Robert Moses was planning in 1945 to build in one city. (Page 839)

It cost at least as much-and possibly more-to move the building than it would have cost to demolish it, and in later years, Mose was quite frank about why he had decided to move it. "I moved it because everybody said you couldn't do it," he would tell the author. “T'll never do that again, broke a lot of gas mains . . . That was an absolutely crazy stunl, you know." But at the recollection, a broad, genuine grin spread across Moses' face, a grin of achievement and pride. (Page 846)

And if an expressway is designed for buses as well as automobiles-if one lane, slightly wider than the normal lanes, is reserved exclusively for buses by separating it from the others by a divider and if the width and turning radii of entrance and exit ramps are made big enough to facilitate their use by the big vehicles-hundreds of buses can use that lane in an hour, theoretically as many as 800, conservatively 400. The capacity of that lane becomes 20,000 people per hour, about thirteen times greater than it was before. Designing and reserving for buses two of the Long Island Expressway's sıă lanes-one in each direction-would be the equivalent of building a new eight-lane expressway right next to it. (Page 944)

At the next exit, I got off and found a store and bought a yardstick and got back on the parkway and measured the next bridge. At the curb it was eleven feet high. And I didn't have to go and measure all the other bridges. I knew right then what I was going to find. I knew right then what the old son of a gun had done. He had built the bridges so low that buses couldn't use the parkways!" (Page 951)

“You see," Jack Sheridan says, "if we had had subway lines, or rapid transit lines, we would have had high density along those lines. But since there was no mass transit, the development took place according to the way the automobile dictated it, And that meant low density, very low density. To have feasible mass transit routes, you have to have sufficient density. And we don't. (Page 958)

Within hours, every major radio station in New York was telling its listeners the story of the mothers, the baby carriages and the bulldozer. That evening, the story was on every major television newscast. The next day, a picture of mothers and children lined up defiantly between the menacing machine and a large tree was displayed prominently in every newspaper in town. (Page 1003)

Seventy-one years old, Robert Moses, the Robert Moses whom the press persisted in describing as "independently wealthy," was, so far as cash was concerned, all but penniless. (Page 1060)

As for the state's largest bank, the Chase Manhattan Bank that is probably the most powerful financial institution anywhere on earth, Chase is, as White notes, "the last great bank controlled by an individual family-the Rockefellers." (Page 1067)

"I bet on money-not just any kind of money but old money," one veteran New York politician says. "New money buys things; old money calls notes." In politics in the Empire State, the Rockefellers held enough notes to achieve any aim; their power was as close to an absolute as had ever existed in New York. (Page 1068)

This time, however, the ultimate weapon misfired. After thirty years of issuing that defiant challenge, he had issued it to a man who would take him up on it. On the day after he received Robert Moses' resignation, Nelson Rockefeller accepted it. "I hope you will continue" in the Power Authority post, Rockefeller said. As for the others, "I note that you are making arrangements to resign from the Long Island State Park Commission. This is a decision which I accept with regret." (Page 1076)

The Fair had destroyed what was left of the legend of Robert Moses. The great universal exposition that had been supposed to rehabilitate his popularity had instead destroyed the last of it-and destroyed it beyond repair. When the Fair came to a close on October 17, 1965, Robert Moses was revealed to the public in all his egotism, arrogance and ruthlessness. He was, in fact, portrayed, in the press's emphasis on the $100,000 a year in salary and expenses and the escrow account, as something worse than he was-greedy for money. He was in public disrepute so great that his name had become a symbol for things the public hated. (Page 1114)