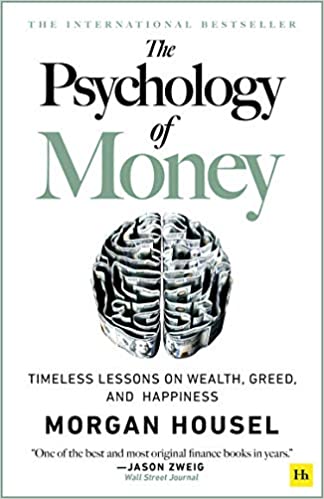 The most important highlights and takeaways from the book The Psychology of Money by Morgan Housel.

The 401(k)-the backbone savings vehicle of American retirement-did not exist until 1978. The Roth IRA was not born until 1998. If it were a person it would be barely old enough to drink. (Page 21)

Bill Gates went to one of the only high schools in the world that had a computer. (Page 25)

Say I buy a stock, and five years later it's gone nowhere. It's possible that I made a bad decision by buying it in the first place. It's also possible that I made a good decision that had an 80% chance of making money, and I just happened to end up on the side of the unfortunate 20%. How do I know which is which? Did I make a mistake, or did I just experience the reality of risk? (Page 29)

Failure can be a lousy teacher, because it seduces smart people into thinking their decisions were terrible when sometimes they just reflect the unforgiving realities of risk. The trick when dealing with failure is arranging your financial life in a way that a bad investment here and a missed financial goal there won't wipe you out so you can keep playing until the odds fall in your favor (Page 34)

There is no reason to risk what you have and need for what you don't have and don't need. (Page 41)‍

The hardest financial skill is getting the goalpost to stop moving. (Page 41)

We can spend years trying to figure out how Warren Buffett achieved his investment returns: how he found the best companies, the cheapest stocks, the best managers. That's hard. Less hard but equally important is pointing out what he didn't do.

More than I want big returns, I want to be financially unbreakable. And if l'm unbreakable I actually think l'll get the biggest returns, because l'll be able to stick around long enough for compounding to work wonders. (Page 62)

Planning is important, but the most important part of every plan is to plan on the plan not going according to plan. (Page 63)

A barbelled personality-optimistic about the future, but paranoid about what will prevent you from getting to the future-is vital. (Page 64)‍

A good definition of an investing genius is the man or woman who can do the average thing when all those around them are going crazy. (Page 77)

"It's not whether you're right or wrong that's important, George Soros once said, "but how much money you make when you're right and how much you lose when you're wrong." You can be wrong half the time and still make a fortune. (Page 80)

Having a strong sense of controlling one's life is a more dependable predictor of positive feelings of wellbeing than any of the objective conditions of life we have considered. (Page 84)

Spending money to show people how much money you have is the fastest way to have less money. (Page 95)

Exercise is like being rich. You think, "I did the work and I now deserve to treat myself to a big meal." Wealth is turning down that treat meal and actually burning net calories. It's hard, requires self-control. But it creates a between what you pnd gap could do and what you choose to do that accrues to you over time. (Page 99)‍

The world is filled with people who look modest but are actually wealthy and people who look rich who live at the razor's edge of insolvency. Keep this in mind when quickly judging others success and setting your own goals. (Page 100)

Before World War II most Americans worked until they died. That was the expectation and the reality. The labor force participation rate of men age 65 and over was above 50% until the 1940s.

The first idea-simple, but easy to overlook-is that building wealth has little to do with your income or investment returns, and lots to do with your savings rate. (Page 103)‍

There are professional investors who grind 80 hours a week to add a tenth of a percentage point to their returns when there are two or three full percentage points of lifestyle bloat in their finances that can be exploited with less effort. (Page 105)

Past a certain level of income, what you need is just what sits below your ego. (Page 106)

Savings in the bank that earn 0% interest might actually generate an extraordinary return if they give you the flexibility to take a job with a lower salary but more purpose, or wait for investment opportunities that come when those without flexibility turn desperate. (Page 108)‍

"Things that have never happened before happen all the time." (Page 123)

The thing that makes tail events easy to underappreciate is it is to underestimate how things compound. How, for example, 9/11 prompted the Federal Reserve to cut interest rates, which helped drive the housing bubble, which led to the financial crisis, which led to a poor jobs market, which led tens of millions to seek a college education, which led to $1.6 trillion in student loans with a 10o.8% default rate. It's not intuitive to link 19 How upon how easy hijackers to the current weight of student loans, but that's what happens in a world driven by a few outlier tail events. (Page 126)

Bill Gates understood this well. When Microsoft was a young company, he said he “came up with this incredibly conservative approach that I wanted to have enough money in the bank to pay a year's worth of payroll even if we didn't get any payments coming in."Warren Buffett expressed a similar idea when he told Berkshire Hathaway shareholders in 2008: "I have pledged-to you, the rating agencies and myself-to always run Berkshire with more than ample cash ... When forced to choose, I will not trade even a night's sleep for the chance of extra profits." (Page 140)

I think of my own money as barbelled. I take risks with one portion and am terrified with the other. This is not inconsistent, but the psychology of money would lead you to believe that it is. I just want to ensure I can remain standing long enough for my risks to pay off. You have to survive to succeed. To repeat a point we've made a few times in this book: The ability to do what you want, when you want, for as long as you want, has an infinite ROI. (Page 143)

The End of History Illusion is what psychologists call the tendency for people to be keenly aware of how much they've changed in the past, but to underestimate how much their personalities, desires, and goals are likely to change in the future. (Page 151)

We should avoid the extreme ends of financial planning. Assuming you'll be happy with a very low income, or choosing to work endless hours in pursuit of a high one, increases the odds that you'll one day find yourself at a point of regret. (Page 152)

Every job looks easy when you're not the one doing it because the challenges faced by someone in the arena are often invisible to those in the crowd, (Page 158)

Bubbles form when the momentum of short-term returns attracts enough money that the makeup of investors shifts from mostly long term to mostly short term. (Page 169)

The main thing I can recommend is going out of your way to identify what game you're playing. (Page 173)

Tell someone that everything will be great and they're likely to either shrug you off or offer a skeptical eye. Tell someone they're in danger and you have their undivided attention. (Page 179)

There is an iron law in economics: extremely good and extremely bad circumstances rarely stay that way for long because supply and demand adapt in hard-to-predict ways. (Page 183)‍

Progress happens too slowly to notice, but setbacks happen too quickly to ignore. (Page 184)

The more you want something to be true, the more likely you are to believe a story that overestimates the odds of it being true. (Page 193)

I once calculated that if you just assume that the market goes up every year by its historic average, your accuracy is better than if you follow the average annual forecasts of the top 20 market strategists from large Wall Street banks. (Page 199)‍

Manage your money in a way that helps you sleep at night. That's different from saying you should aim to earn the highest returns or save a specific percentage of your income. Some people won't sleep well unless they're earning the highest returns; others will only get a good rest if they're conservatively invested. To each their own. But the foundation of, "does this help me sleep at night?" is the best universal guidepost for all financial decisions. (Page 208)‍

The independent feeling I get from owning our house outright far exceeds the known financial gain I'd get from leveraging our assets with a cheap mortgage. Eliminating the monthly payment feels better than maximizing the long-term value of our assets. It makes me feel independent. (Page 217)

We also keep a higher percentage of our assets in cash than most financial advisors would recommend-something around 20% of our assets outside the value of our house. This is also close to indefensible on paper, and I'm not recommending it to others. It's just what works for us. (Page 217)‍

If you can meet all your goals without having to take the added risk that comes from trying to outperform the market, then what's the point of even trying? I can afford to not be the greatest investor in the world, but I can't afford to be a bad one. (Page 219)

I Will Teach You to Be Rich by Ramit Sethi