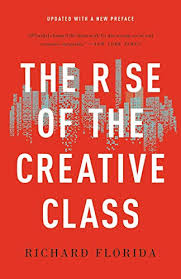 The most important highlights and takeaways from The Rise of the Creative Class by Richard Florida.

This book was the continuation of an ongoing intellectual project to marry three strands of theory- Karl Marx's theories of capitalist development and class, Joseph Schumpeter's theories of innovation and economic development, and Jane Jacobs's ideas on the centrality of cities in our society and economy. (Intro)

The very same clustering of Creative Class activity that has powered technological innovation and economic growth has simultaneously carved deep economic and political divides that have spurred a populist political backlash. (Intro)

I define the core of the Creative Class to include people in science and engineering, architecture and design, education, arts, music, and entertainment whose economic function is to create new ideas, new technology, and new creative content. Around this core, the Creative Class also includes a broader group of creative professionals in business and finance, law, health care, and related fields. These people engage in complex problem solving that involves a great deal of independent judgment and requires high levels of education or human capital. (Page 8)

As the economy has become more specialized and the occupational division of labor has deepened, the Creative Class has increasingly outsourced functions that were previously provided within the family to the Service Class. (Page 47)

Numerous Creative Class people I interviewed noted their desire to become actively engaged in the places they live-to contribute to their communities and to have some latitude in their jobs to do so. Of course, executives have long been enlisted to lead charitable campaigns or to serve on the boards of nonprofit institutions. (Page 76)

Americans suffer from a "time famine." "Time has become the most precious commodity," they wrote, "and the ultimate scarcity for millions of Americans." Their research found an across-the-board increase in people saying they felt "hurried" or "rushed" in their daily activities. The number reporting they "always feel rushed" increased from 24 percent of working-age (eighteen to sixty-four years old) respondents in 1965 to 38 percent by 1992. (Page 126)

In many Creative Class fields, people manage their careers by "front-loading"–working excruciatingly long and hard at the outset of their professional lives in the hope that it will pay off in greater income, marketability, and mobility later. (Page 129)

With so many people feeling chronically pressed for time, a new strategy of sorts has emerged: “time deepening." Robinson and Godbey describe it this way:

Some of these class preferences reflect the nature of work itself. Members of the traditional Working Class spend the day engaged in physical labor and are thus inclined to relax during their time off. But if you spend your workday in front of a computer screen or an artist's canvas, you are probably not eager to spend your leisure time in front of a TV screen. You are much more likely to want to get out and be active. (Page 139)

Richard Lloyd and Mark Banks, who in their separate writings note that what at first glance might appear to be leisure activities-engagement in art, participation in active sports and recreation, even bohemian rejection of the status quo–may at a deeper level be a less-obvious form of work. In a 2009 essay, Banks criticized me on this score, writing that the "traditional notion of leisure as an autonomous, work-antithetical practice may be disappearing." (Page 143)

Leisure is undertaken not for its own sake but to enhance the creative experience-which for the Creative Class, is work. The boundaries between leisure and work have become so blurry that the two have effectively blended into one another. (Page 144)

Many Creative Class people thus tend to shun the heavily packaged commercial venues they call "generica"-the chain restaurants and nightclubs, the stadiums with bells and whistles-or they patronize them but with a conscious sense of irony and camp, as in the obligatory trip to a business conference in Las Vegas. They prefer more authentic, indigenous, or organic venues that offer a wide range of options, places where they can have a hand in creating them. (Page 154)

Like police and fire departments, eds and meds are basic necessities. Every place must devote some of its workforce to them. But out-of-state tuitions and government research grants notwithstanding, they bring in relatively little money from outside. Occupations like management science and engineering and even arts and culture tend to produce exportable products that can be sold far and wide. (Page 216)

The key to understanding the new economic geography of creativity and its positive effects on economic outcomes is what I call the 3T's of economic development: technology, talent, and tolerance. (Page 228)

It might have been good fodder for late-night TV, but the evidence didn't lie. The Gay Index and the Bohemian Index were amazing, indeed, shockingly powerful predictors of regional housing prices." (Page 241)

Quality of Place can be summed up as an interrelated set of experiences.

They equate authentic with being real, as in a place that has real buildings, real people, real history. A place that's full of chain stores, chain restaurants, and chain nightclubs is seen as inauthentic: Not only do these venues look pretty much the same everywhere, they offer the same experiences you could have anywhere. (Page 295)

If city leaders tell me to wear whatever I want, take me to a casually contemporary café or restaurant for dinner, and, most important, encourage me to talk openly about the role of diversity and gays, I am confident their city will be able to attract the Creative Class and prosper in this emerging era. If, on the other hand, they ask me to "please wear a business suit and a tie," escort me to a private club for dinner, and ask me to "play down the stuff about bohemians and gays," I can be reasonably certain that they will have a hard time making it. (Page 314)

all communities are filled with deep reservoirs of creative energy. But what holds so many back, she added, are "Squelchers"-overly controlling types who believe that they and they alone know what's best for their city or region. They use the word no a lot and respond to new initiatives or ideas with comments like, "That's not how we do things here"; “That will never fly"; or "Why don't you just move someplace else?" (Page 315)

although the broad structural transformation of our economy splits the labor market and increases the wage gap between the major classes, it has only a modest effect on income inequality broadly. In fact, the least-skilled and lowest-paid workers-the members of the Working and Service Classes-are actually economically better off in more affluent and knowledge-based regions with higher concentrations of the Creative Class, even if the wage gap is wider. (Page 365)

If industrial age schools readied our children for the workforce, Creative Age schools must prepare them to manage their careers and build businesses of their own. The goal can no longer just be to get a job but rather to create a job-and to create more jobs for others. (Page 389)

At the local level, cities and communities need to stop subsidizing stadiums, convention centers, and other mega-projects that add little to their economies and stop encouraging bland, generic development. They need to invest in people climates as well as business climates; cultivate all 3T's; promote density, transit-oriented development, and walkability; create green spaces and other public spaces; encourage diversity; and build real quality of place. (Page 394)

But the clock of history never stops ticking. Sooner or later, some city or nation is going to figure out what it takes to fully engage the full creative potential of its people. If we want to gain the advantages of precedence, we need to accelerate this transformation to a more human-centered, diverse, and inclusive creative society-where the full potential of every single human being is valued and realized. Our future as a thriving, prosperous, democratic society is at stake. (Page 400)

The Practicing Mind by Thomas Sterner

The Little Book of Talent by Daniel Coyle