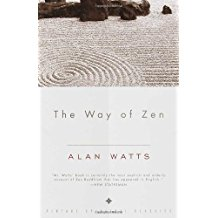 Writing about Zen is difficult since many “objective observers” “miss the point and eat the menu instead of the dinner.”

The Philosophy of the Tao

A way of liberation can have no positive definition, it has to be defined by what it is not, as how a sculptor reveals the image by chipping away what it isn’t. (David quote)

Taoism and Zen confuse westerners because we thinking “conventional” knowledge, what we can define with words. Conventional knowledge is such because it’s based on social agreement as to the codes of communication.

Scientific convention says whether an eel is a snake or a fish, grammatical convention determines rules of language. But those conventions are illusory, as evidenced by asking questions like “what happens to my fist when I open my hand?” One who thinks in Chinese has little difficulty in seeing that objects are also events, but in the west, that is hard for us.

Oriental music is taught in a different style, where the student learns by listening to the performance of the teacher instead of reading notes. They get a feel for music that’s only rivaled by jazz musicians.

We “know” how to move our hands, breathe, but we cannot explain how we do it. Taoism is an extension of this kind of knowledge, giving us a very different view from what we’re conventionally used to, and which liberates our minds from constricting definitions and identifications.

The Tao is the indefinable, concrete “process” of the world, the Way of life. The word means a way or road, and sometimes “to speak.”

God produces the world by making (wei) but Tao produces it by not-making (wu-wei), which is roughly what we mean by “growing.” Things are made like machines by being put together, or from without inwards like sculptures, but things grown divide themselves into parts from within outwards (garden).

The goal is not to reduce the human mind to vacancy, but to bring into play its innate and spontaneous intelligence by using it without forcing it.

Wu-shin:i No-mind, un-self-consciousness, is a goal of Taoism. The Taoist is one who has learned to let the legs walk by themselves.

The Origins of Buddhism

All forms of Buddhism subscribe to the “middle way,” between the extremes of angels (deva) and demon (preta), ascetic and sensualist, and claim that supreme “awakening” or Buddhahood can be attained only from the human state.

Fundamental to Indian thought is the mythological theme of atma-yanja, the act of “self sacrifice” whereby God gives birth to the world, and whereby men, following the divine pattern, reintegrate themselves with God.

Indian philosophy is primarily concerned with moksha, or “liberation.” Liberation is a progressive disentanglement of one’s self from every identification. It is to realize that I am not this body, these feelings, these thoughts, this consciousness.

Classification is maya. The world of facts and events are maya, they’re terms of measurement rather than realities of nature. The maya doctrine tells us that these forms (rupa) have no “own being” or “self nature” (svabhava): they don’t exist in their own right, but in relation to each other, as a solid cannot be distinguished except in relation to space.

Names are useful, but we can’t confuse the measure with the world being measured, of identifying money with wealth, fixed convention with fluid reality.

The maya doctrine points out the impossibility of grasping the actual world in the minds net of words and concepts, and secondly, the fluid character of those very forms which thoughts attempt to define. The world of facts and names is known as nama, abstract names rupa.

If meditation is treated as an exercise with a goal, to quiet our minds, it ceases to be meditation. Where there is purpose, there is seeking and grasping for results, and thus there can be no meditation.

Dhyana: can be described as the state of unified or one-pointed awareness.

Mahayana Buddhism highlights the futility of striving for liberation in which there is no striving: it’s self-contradictory. Desiring not to desire.

The real nirvana cannot be desired because it cannot be conceived.

To become a Buddha, it is only necessary to have the faith that one is a Buddha already.

The Rise and Development of Zen

Zen has always attached importance to expressing Buddhism in secular terms, in art of every type, in manual labor, and in appreciation for the natural universe.

Nirvana cannot be approached or grasped or pursued. It must be realized in an instant, a single flash of insight, which is satori.

The attempt to work on one’s own mind is a vicious cycle. To try to purify it is to be contaminated with purity.

The Zen problem, or koan, requires passing a series of tests based on the mondo or anecdotes of old masters. The students have to show that they have experienced the meaning of the koan by a specific and usually nonverbal demonstration which he has to discover intuitively.

Bushido, the Tao of the warrior, is the application of Zen to the art of war.

There is not a big focus on za-zen, or sitting meditation, it’s generally criticized, though its unclear why. It could be that they didn’t like za-zen for a purpose, pursuing satori. Works argue that sitting should not be treated specially, that to do so is an “attachment to form.” Zen was more practiced through the tea ceremony, flute playing, brush drawing, archery, fencing, and ju-jutsu. Za-zen may have been exaggerated later as a way to get school boys to be quiet.

One must start to get the feel of (zen) relativity, by knowing that life is not a situation from which there is anything to be grasped or gained. To succeed is always to fail, in that the more one succeeds in anything, the greater is the need to go on succeeding. To eat is to survive to be hungry.

There is no “myself” apart from the mind body which gives structure to my experience.

“In walking, just walk. In sitting, just sit. Above all, don’t wobble.”

When a human is so self-conscious, so self-controlled, that he cannot let go of himself, he dithers or wobbles between opposites.

The effort to remain always “good” or “happy” is like trying to keep a house at a perfect 70 degrees. It necessitates such constant rapid oscillations that it will surely induce mania and anxiety.

Zen spirituality is not to think about God while peeling the potatoes, it is to simply peel the potatoes.

Za-Zen and the Koan

Zen practice is not true practice if it has an end in mind, and when it has no end in view it is awakening, the aimless, self-sufficient life of the eternal now. To have an eye on some end is to have lack of concentration, lack of sincerity. One does not practice Zen to become a buddha, but practices it because they are a buddha.

Satori is not a sudden complete awakening, it is the sudden and intuitive way of seeing into anything, whether it be remembering a forgotten name or seeing into the deepest principles of Buddhism.

The koan is a way of stressing the mind into having to relax and release itself. Like increasing muscular tension to give yourself a feeling of what not to do. The satori is not a feeling of relaxation, though, it is letting go but not feeling it.

Zen in the Arts

Zen has no goal, it is traveling without point, with nowhere to go. To travel is to be alive, but to arrive is to be dead. A world which focuses on destinations, which only cares about getting somewhere as fast as possible, becomes a world without substance.

Zen is a liberation from time. If we open our eyes and see clearly, it becomes obvious that there is no other time than this instant, and that the past and future are abstractions without any concrete reality.