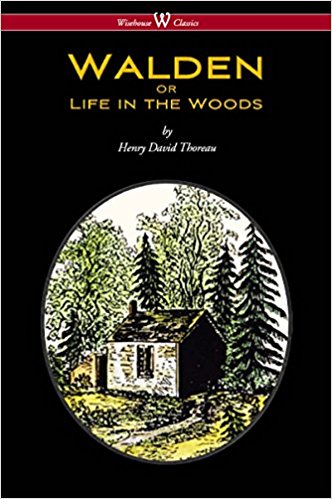 I really loved every part of Walden not about the mechanics of living there. The philosophy is beautiful and empowering, discussing taking your own path, living simply, happiness, and standing out confidently. Skip over the financial statements, if you try to trudge through them you might get bored and not finish.

“We commonly do not remember that it is, after all, always the first person that is speaking. I should not talk so much about myself if there were anybody else whom I knew as well.”

“I see young men, my townsmen, whose misfortune it is to have inherited farms, houses, barns, cattle, and farming tools; for these are more easily acquired than got rid of. Better if they had been born in the open pasture and suckled by a wolf, that they might have seen with clearer eyes what field they were called to labor in.”

“Most men, even in this comparatively free country, through mere ignorance and mistake, are so occupied with the factitious cares and superfluously coarse labors of life that its finer fruits cannot be plucked by them.”

“The finest qualities of our nature, like the bloom on fruits, can be preserved only by the most delicate handling. Yet we do not treat ourselves nor one another thus tenderly.”

“See how he cowers and sneaks, how vaguely all the day he fears, not being immortal nor divine, but the slave and prisoner of his own opinion of himself, a fame won by his own deeds. Public opinion is a weak tyrant compared with our own private opinion. What a man thinks of himself, that it is which determines, or rather indicates, his fate.”

“The mass of men lead lives of quiet desperation. What is called resignation is confirmed desperation.”

“It is never too late to give up our prejudices. No way of thinking or doing, however ancient, can be trusted without proof.”

“I have lived some thirty years on this planet, and I have yet to hear the first syllable of valuable or even earnest advice from my seniors.”

“Could a greater miracle take place than for us to look through each other’s eyes for an instant?”

“Man has invented, not only houses, but clothes and cooked food; and possibly from the accidental discovery of the warmth of fire, and the consequent use of it, at first a luxury, arose the present necessity to sit by it.”

“So, we are told, the New Hollander goes naked with impunity, while the European shivers in his clothes. Is it impossible to combine the hardiness of these savages with the intellectualness of the civilized man? According to Liebig, man’s body is a stove, and food the fuel which keeps up the internal combustion in the lungs. In cold weather we eat more, in warm less.”

“Most of the luxuries, and many of the so-called comforts of life, are not only not indispensable, but positive hindrances to the elevation of mankind.”

“There are nowadays professors of philosophy, but not philosophers. Yet it is admirable to profess because it was once admirable to live. To be a philosopher is not merely to have subtle thoughts, nor even to found a school, but so to love wisdom as to live according to its dictates, a life of simplicity, independence, magnanimity, and trust. It is to solve some of the problems of life, not only theoretically, but practically.”

“When he has obtained those things which are necessary to life, there is another alternative than to obtain the superfluities; and that is, to adventure on life now, his vacation from humbler toil having commenced.”

“Yet not the less, in my case, did I think it worth my while to weave them, and instead of studying how to make it worth men’s while to buy my baskets, I studied rather how to avoid the necessity of selling them. The life which men praise and regard as successful is but one kind. Why should we exaggerate any one kind at the expense of the others?”

“In the long run men hit only what they aim at. Therefore, though they should fail immediately, they had better aim at something high.”

“I never in all my walks came across a man engaged in so simple and natural an occupation as building his house.” — Thoreau’s descriptions of home building make me want to build my own cabin at some point

“How could youths better learn to live than by at once trying the experiment of living?”

“Which would have advanced the most at the end of a month—the boy who had made his own jackknife from the ore which he had dug and smelted, reading as much as would be necessary for this—or the boy who had attended the lectures on metallurgy at the Institute in the meanwhile, and had received a Rodgers’ penknife from his father?”

“This spending of the best part of one’s life earning money in order to enjoy a questionable liberty during the least valuable part of it reminds me of the Englishman who went to India to make a fortune first, in order that he might return to England and live the life of a poet.”

“For more than five years I maintained myself thus solely by the labor of my hands, and I found that, by working about six weeks in a year, I could meet all the expenses of living.”

“and then I let it lie, fallow, perchance, for a man is rich in proportion to the number of things which he can afford to let alone.”

“We must learn to reawaken and keep ourselves awake, not by mechanical aids, but by an infinite expectation of the dawn, which does not forsake us in our soundest sleep. I know of no more encouraging fact than the unquestionable ability of man to elevate his life by a conscious endeavor.”

“I went to the woods because I wished to live deliberately, to front only the essential facts of life, and see if I could not learn what it had to teach, and not, when I came to die, discover that I had not lived.”

“Why should we live with such hurry and waste of life? We are determined to be starved before we are hungry.”

“Time is but the stream I go a-fishing in. I drink at it; but while I drink I see the sandy bottom and detect how shallow it is. Its thin current slides away, but eternity remains.”

“Society is commonly too cheap. We meet at very short intervals, not having had time to acquire any new value for each other.”

“You want room for your thoughts to get into sailing trim and run a course or two before they make their port.”

“—young men who had ceased to be young, and had concluded that it was safest to follow the beaten track of the professions—”

“If he is surrounded by mountainous circumstances, an Achillean shore, whose peaks overshadow and are reflected in his bosom, they suggest a corresponding depth in him. But a low and smooth shore proves him shallow on that side.”

“if we lived in the present always, and took advantage of every accident that befell us, like the grass which confesses the influence of the slightest dew that falls on it; and did not spend our time in atoning for the neglect of past opportunities, which we call doing our duty. We loiter in winter while it is already spring.”

“The surface of the earth is soft and impressible by the feet of men; and so with the paths which the mind travels. How worn and dusty, then, must be the highways of the world, how deep the ruts of tradition and conformity!”

“I learned this, at least, by my experiment: that if one advances confidently in the direction of his dreams, and endeavors to live the life which he has imagined, he will meet with a success unexpected in common hours.”

“However mean your life is, meet it and live it; do not shun it and call it hard names. It is not so bad as you are. It looks poorest when you are richest. The fault-finder will find faults even in paradise. Love your life, poor as it is. You may perhaps have some pleasant, thrilling, glorious hours, even in a poorhouse.”

“Only that day dawns to which we are awake. There is more day to dawn. The sun is but a morning star.”