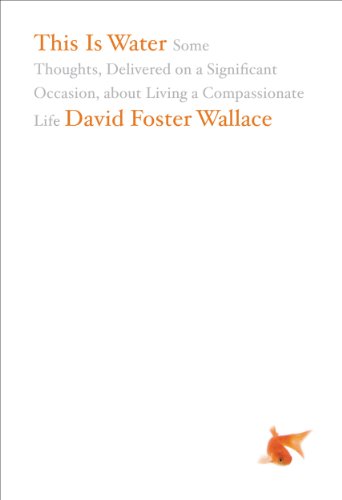 Powerful, concise, worth reading multiple times to redigest what is both a simple yet profound idea.

“The immediate point of the fish story is merely that the most obvious, ubiquitous, important realities are often the ones that are hardest to see and talk about.”

“The point here is that I think this is one part of what the liberal arts mantra of “teaching me how to think” is really supposed to mean: to be just a little less arrogant, to have some “critical awareness” about myself and my certainties… because a huge percentage of the stuff that I tend to be automatically certain of is, it turns out, totally wrong and deluded.”

“As I’m sure you guys know by now, it is extremely difficult to stay alert and attentive instead of getting hypnotized by the constant monologue inside your head.”

“And I submit that this is what the real, no-shit value of your liberal arts education is supposed to be about: How to keep from going through your comfortable, prosperous, respectable adult life dead, unconscious, a slave to your head and to your natural default setting of being uniquely, completely, imperially alone, day in and day out.”

“If you’re automatically sure that you know what reality is and who and what is really important — if you want to operate on your default setting — then you, like me, probably will not consider possibilities that aren’t pointless and annoying.”

“This, I submit, is the freedom of real education, of learning how to be well- adjusted: You get to consciously decide what has meaning and what doesn’t.”

“The really important kind of freedom involves attention, and awareness, and discipline, and effort, and being able truly to care about other people and to sacrifice for them, over and over, in myriad petty little unsexy ways, every day.”

“The alternative is unconsciousness, the default setting, the “rat race” — the constant, gnawing sense of having had and lost some infinite thing.”

“It is about the real value of a real education, which has nothing to do with grades or degrees and everything to do with simple awareness — awareness of what is so real and essential, so hidden in plain sight all around us, that we have to keep reminding ourselves over and over:.. This is Water”