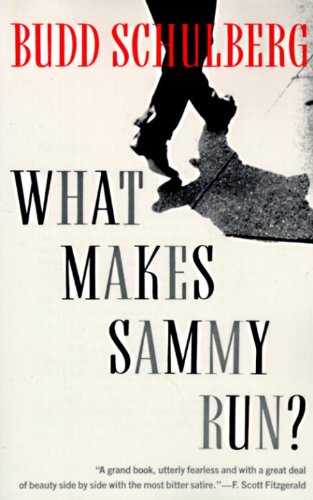 I found it hard to get through at times, but the ending is very satisfying. The last few pages are amazing, but you do need the entire story to get there and understand it. Worth a read for anyone who tends to work hard at the expense of everything else in life.

“Trying to hurt his feelings was like trying to shoot an elephant with a BB gun. It simply tickled him.”

“It was no secret to anybody that she was working out on him and he was working out on her, each one wanting something and not quite admitting it. Some people call that the Hollywood tug of war, though that concept is a little narrow. Hollywood may be one of its most blatant battlegrounds, but it is really a world war, undeclared.”

““I’ve always liked to do it because it’s just about the most fun you get out of life and because—I bet you laugh at me for this—it’s always seemed like the friendliest thing two people can do in the whole world. That’s why I’ve never wanted to turn pro. But—I know this sounds crazy—but somehow I’ve always felt that if I ever went to bed with him—even if he didn’t pay me—I’d feel like I was doing it for money.””

““I make it a rule never to let anything cut into my work. I don’t even take calls from the Guild office. The only way to get ahead in this business is to do one thing at a time.””

““I wonder what would happen if Sammy used all that energy and imagination to create something—not just to devise ways of reaching the top without creating anything.”

“I saw Sammy Glick on a battlefield where every soldier was his own cause, his own army and his own flag, and I realized that I had singled him out not because he had been born into the world any more selfish, ruthless and cruel than anybody else, even though he had become all three, but because in the midst of a war that was selfish, ruthless and cruel Sammy was proving himself the fittest, the fiercest and the fastest.”

“I was sitting at my typewriter hoping for an interruption when the phone rang.”

“To dance as badly as Sammy and not be ashamed of it set him apart from all the other men she had ever known.”

“Of course, there are less spectacular ways of taking your life than by gun or gas; there is the slow leak when the will is punctured, what the poet was trying to say when he spoke of dying of a broken heart.”

“No matter where he would ever be, at banquets, at gala house parties, in crowded night clubs, in big poker games, at intimate dinners, he would still be wandering alone through all his brightly lit rooms.”

“I thought how, unconsciously, I had been waiting for justice suddenly to rise up and smite him in all its vengeance, secretly hoping to be around when Sammy got what was coming to him; only I had expected something conclusive and fatal and now I realized that what was coming to him was not a sudden pay-off but a process, a disease he had caught in the epidemic that swept over his birthplace like plague; a cancer that was slowly eating him away, the symptoms developing and intensifying: success, loneliness, fear. Fear of all the bright young men, the newer, fresher Sammy Glicks that would spring up to harass him, to threaten him and finally to overtake him.”

“But you can’t have your brothers and eat them too.”