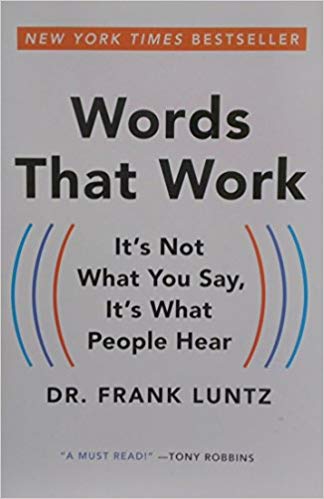 One of the best books on speech and copywriting. It’ll take your awareness of political messaging to new heights, and give you a greater ability to influence others through your word choice alone.

“It’s not what you say, it’s what people hear. You can have the best message in the world, but the person on the receiving end will always understand it through the prism of his or her own emotions, preconceptions, prejudices, and preexisting beliefs.”

“Words that work, whether fiction or reality, not only explain but also motivate. They cause you to think as well as act. They trigger emotion as well as understanding.”

“These, then, are the ten rules of effective communication, all summarized in single words: simplicity, brevity, credibility, consistency, novelty, sound, aspiration, visualization, questioning, and context. If your tagline, slogan, or message meets most of these criteria, chances are it will meet with success. If it meets all ten, it has a shot at being a home run. But in the history of political verbiage and product marketing, less than one in one thousand hit it out of the park. ”

“The single greatest challenge for those in the world of politics is the inherent assumption that everyone else knows as much as they do.”

“The problem with far too many male politicians and executives is that they tend to make everything into a sports analogy. In my years of interviewing women from all across the country and in all walks of life, I’ve consistently found that this drives women insane.”

“Law enforcement is the process, and therefore less popular, while reducing crime is the desirable result. The language lesson: Focus on results, not process.”

“Orwell also lays out a series of language rules. Every one of them is sound writing advice, whether you’re looking for your first job or you’ve already reached the pinnacle of corporate or political success:

“We have also found that Americans would prefer greater energy efficiency to increased conservation because “efficiency” suggests getting more for less while “conservation” has a tone of sacrifice to it. For that same reason, “renewable” energy is more popular than “alternative” energy.”

“In my research into the effectiveness of direct mail, the single most-read portion after the opening paragraph is the postscript. The reason is easy to understand: The average reader looks to the P.S. to determine whether or not it is in fact a personal letter, and whether that letter has any relevance to his or her life. If it isn’t, and if it doesn’t, the average person won’t read anything else. So make the postscript as human and emotional as possible.”