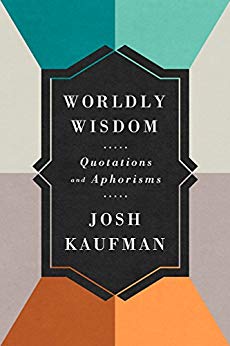 An assorted collection of quotations and aphorisms on various subjects. Unrated since it didn’t really introduce anything, just curate them. Good for a skim through to find interesting ideas and thinkers.

“It is not the strongest of the species that survives, nor the most intelligent, but the one most responsive to change.” – Charles Darwin

“A foolish consistency is the hobgoblin of little minds.” – Ralph Waldo Emerson

“History doesn’t repeat itself, but it does rhyme.” – Mark Twain

“The fact that an opinion has been widely held is no evidence whatever that it is not utterly absurd.” – Bertrand Russell

“Institutions will try to preserve the problem to which they are the solution.” – Clay Shirky

“The best way out is always through.” – Robert Frost

“Go as far as you can see; when you get there you’ll be able to see farther.” – Thomas Carlyle

“You don’t have to be great to start, but you have to start to be great.” – Zig Ziglar

“I am an old man and have known a great many troubles, but most of them never happened.” – Mark Twain

On Success and Failure

“If you set your goals ridiculously high and it’s a failure, you will fail above everyone else’s success.” – James Cameron

“The measure of success is not whether you have a tough problem to deal with, but whether it’s the same problem you had last year.” – John Foster Dulles

“Whenever an individual or a business decides that success has been attained, progress stops.” – Thomas Watson

“It is better to be roughly right than precisely wrong.” – John Maynard Keynes

“In the long run men hit only what they aim at. Therefore, though they should fail immediately, they had better aim at something high.” – Henry David Thoreau

“I write one page of masterpiece to ninety one pages of shit. I try to put the shit in the wastebasket.” – Ernest Hemingway

“Most people don’t really want to do stuff. They want to read stuff, talk about stuff, plan stuff, design stuff, but they don’t want to do stuff. People have come to me and asked me for advice on some stuff I know after I wrote about it. I tell them what to do, but most of them just don’t do it. People are afraid to compete because they prefer to pretend they could have won if they played, than to know that they played and lost.” – Max Klein

“Brick walls are there for a reason. They give us a chance to show how badly we want something.” – Randy Pausch

“If you do experiments and you’re always right, then you aren’t getting enough information out of those experiments. You want your experiment to be like the flip of a coin: You have no idea if it is going to come up heads or tails. You want to not know what the results are going to be.” – Peter Norvig

“If thou wilt make a man happy, add not unto his riches but take away from his desires.” – Epicurus

“There is no more fatal blunderer than he who consumes the greater part of his life getting his living.” – Henry David Thoreau

“Wealth, like happiness, is never attained when sought after directly. It comes as a by-product of providing a useful service.” – Henry Ford

“If money is your hope for independence you will never have it. The only real security that a man will have in this world is a reserve of knowledge, experience, and ability.” – Henry Ford

“If you would know the value of money, go and try to borrow some.” – Benjamin Franklin

“It is preoccupation with possession, more than anything else, that prevents men from living freely and nobly.” – Bertrand Russell

“We act as though comfort and luxury were the chief requirements of life, when all we need to make us happy is something to be enthusiastic about.” – Charles Kingsley

“I want to leave enough money to my children that they can do anything, but no so much that they will do nothing.” – Warren Buffett

“When money ceases to become the means by which men deal with one another, then men become the tools of other men. Blood, whips and guns – or dollars. Take your choice – there is no other.” – Ayn Rand

“So often people are working hard at the wrong thing. Working on the right thing is probably more important than working hard.” – Caterina Fake

“There is nothing so useless as doing efficiently that which should not be done at all.” – Peter Drucker

“Finish each day and be done with it. You have done what you could. Some blunders and absurdities no doubt crept in; forget them as soon as you can. Tomorrow is a new day; begin it well and serenely and with too high a spirit to be encumbered with your old nonsense.” – Ralph Waldo Emerson

“If not controlled, work will flow to the competent man until he submerges” – Charles Boylet

“If you find a path with no obstacles, it probably doesn’t lead anywhere.” – Frank A. Clark

“Work expands so as to fill the time available for its completion.” – Cyril Northcote Parkinson

“Anyone can do any amount of work provided it isn’t the work he’s supposed to be doing at the moment.” – Robert Benchley

“In fact, what’s stopping 99% of them is that writing novels is hard. When the job goes away, they see how hard.” – Paul Graham

“The standard pace is for chumps. There’s no speed limit.” – Kimo Williams

“What people say they want and what people are willing to work their ass off to get are two different things.” – Hugh MacLeod

“If people knew how hard I worked to gain my mastery, it wouldn’t seem so wonderful.” – Michelangelo

“Success is a function of persistence and doggedness and the willingness to work hard for twenty-two minutes to make sense of something that most people would give up on after thirty seconds.” – Malcolm Gladwell

“No masterpiece was ever created by a lazy artist.” – Salvador Dali

“Patience is the greatest of all virtues.” – Cato the Elder

“When you are not practicing, someone else is. When you meet him, he will win.” – Martial Arts Proverb

“The craftsman is most free when his tools are proportionate to his needs.” – Yanagi Soetsu

“If the only tool you have is a hammer, you tend to see every problem as a nail.” – Abraham Maslow

“If you can’t describe what you are doing as a process, you don’t know what you’re doing.” – W. Edwards Deming

“As to methods, there may be a million and then some, but principles are few. The man who grasps principles can successfully select his own methods. The man who tries methods, ignoring principles, is sure to have trouble.” – Ralph Waldo Emerson

“The work you do while you procrastinate is probably the work you should be doing for the rest of your life.” – Jessica Hische

“Every practice has a set of rules which governs it. Mastery occurs with the realization of these rules. Innovation occurs at the point of intelligent and creative rebellion against them.” – Fiel Valdez

“Watch the costs and the profits will take care of themselves.” – Andrew Carnegie

“The sucker’s trap is when you focus on what you know and what others don’t know, rather than the reverse.” – Nassim N. Taleb

“Goals may cause systematic problems for organizations due to narrowed focus, unethical behavior, increased risk taking, decreased cooperation, and decreased intrinsic motivation. Use care when applying goals in your organization.” – Dan Pink