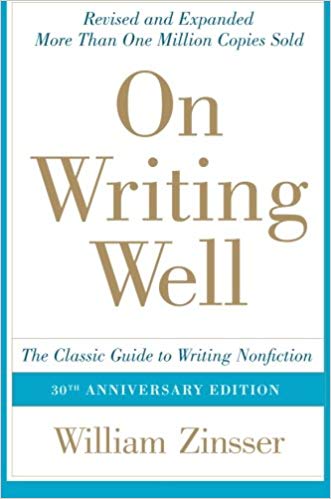 My favorite explicit, directional book on writing better. A must-read for anyone who does any amount of writing.

“I then said that rewriting is the essence of writing. I pointed out that professional writers rewrite their sentences over and over and then rewrite what they have rewritten.”

“The airline pilot who announces that he is presently anticipating experiencing considerable precipitation wouldn’t think of saying it may rain. The sentence is too simple— there must be something wrong with it. But the secret of good writing is to strip every sentence to its cleanest components.”

“Clear thinking becomes clear writing; one can’t exist without the other.”

“The reader is someone with an attention span of about 30 seconds— a person assailed by many forces competing for attention. At one time those forces were relatively few: newspapers, magazines, radio, spouse, children, pets. Today they also include a galaxy of electronic devices for receiving entertainment and information— television, VCRs, DVDs, CDs, video games, the Internet, e-mail, cell phones, BlackBerries, iPods— as well as a fitness program, a pool, a lawn and that most potent of competitors, sleep.”

“Writers must therefore constantly ask: what am I trying to say? Surprisingly often they don’t know. Then they must look at what they have written and ask: have I said it?”

“Writing is hard work. A clear sentence is no accident. Very few sentences come out right the first time, or even the third time. Remember this in moments of despair. If you find that writing is hard, it’s because it is hard.”

“Consider all the prepositions that are draped onto verbs that don’t need any help. We no longer head committees. We head them up. We don’t face problems anymore. We face up to them when we can free up a few minutes. A small detail, you may say— not worth bothering about. It is worth bothering about. Writing improves in direct ratio to the number of things we can keep out of it that shouldn’t be there. “Up” in “free up” shouldn’t be there. Examine every word you put on paper. You’ll find a surprising number that don’t serve any purpose.”

““Experiencing” is one of the worst clutterers. Even your dentist will ask if you are experiencing any pain. If he had his own kid in the chair he would say, “Does it hurt?””

“Don’t inflate what needs no inflating: “with the possible exception of” (except), “due to the fact that” (because), “he totally lacked the ability to” (he couldn’t), “until such time as” (until), “for the purpose of” (for).”

“Most first drafts can be cut by 50 percent without losing any information or losing the author’s voice.”

“But I’ve also noticed a new reason for avoiding “I”: Americans are unwilling to go out on a limb.”

“Sell yourself, and your subject will exert its own appeal. Believe in your own identity and your own opinions. Writing is an act of ego, and you might as well admit it. Use its energy to keep yourself going.”

“You are writing for yourself. Don’t try to visualize the great mass audience. There is no such audience— every reader is a different person. Don’t try to guess what sort of thing editors want to publish or what you think the country is in a mood to read. Editors and readers don’t know what they want to read until they read it. Besides, they’re always looking for something new.”

“You learn to write by writing. It’s a truism, but what makes it a truism is that it’s true. The only way to learn to write is to force yourself to produce a certain number of words on a regular basis.”

“The most important sentence in any article is the first one. If it doesn’t induce the reader to proceed to the second sentence, your article is dead. And if the second sentence doesn’t induce him to continue to the third sentence, it’s equally dead. Of such a progression of sentences, each tugging the reader forward until he is hooked, a writer constructs that fateful unit, the “lead.””

“But I urge you not to count on the reader to stick around. Readers want to know— very soon— what’s in it for them.”

“The perfect ending should take your readers slightly by surprise and yet seem exactly right.”

Most adverbs and adjectives are unnecessary.

“There’s not much to be said about the period except that most writers don’t reach it soon enough.”

“Learn to alert the reader as soon as possible to any change in mood from the previous sentence. At least a dozen words will do this job for you: “but,” “yet,” “however,” “nevertheless,” “still,” “instead,” “thus,” “therefore,” “meanwhile,” “now,” “later,” “today,” “subsequently” and several more. I can’t overstate how much easier it is for readers to process a sentence if you start with “but” when you’re shifting direction. Or, conversely, how much harder it is if they must wait until the end to realize that you have shifted. Many of us were taught that no sentence should begin with “but.” If that’s what you learned, unlearn it— there’s no stronger word at the start. It announces total contrast with what has gone before, and the reader is thereby primed for the change.”

“I only suggest avoiding one form—“ I’d,” “he’d,” “we’d,” etc.— because “I’d” can mean both “I had” and “I would,” and readers can get well into a sentence before learning which meaning it is. Often it’s not the one they thought it was. Also, don’t invent contractions like “could’ve.” They cheapen your style. Stick with the ones you can find in the dictionary.”

“Nouns that express a concept are commonly used in bad writing instead of verbs that tell what somebody did. Here are three typical dead sentences: The common reaction is incredulous laughter. Bemused cynicism isn’t the only response to the old system. The current campus hostility is a symptom of the change.”

“Surprisingly often a difficult problem in a sentence can be solved by simply getting rid of it.”

“You won’t write well until you understand that writing is an evolving process, not a finished product. Nobody expects you to get it right the first time, or even the second time.”

“Try not to use words like “surprisingly,” “predictably” and “of course,” which put a value on a fact before the reader encounters the fact. Trust your material.”

“Actually a simple style is the result of hard work and hard thinking; a muddled style reflects a muddled thinker or a person too arrogant, or too dumb, or too lazy to organize his thoughts.”

“My favorite definition of a careful writer comes from Joe DiMaggio, though he didn’t know that’s what he was defining. DiMaggio was the greatest player I ever saw, and nobody looked more relaxed. He covered vast distances in the outfield, moving in graceful strides, always arriving ahead of the ball, making the hardest catch look routine, and even when he was at bat, hitting the ball with tremendous power, he didn’t appear to be exerting himself. I marveled at how effortless he looked because what he did could only be achieved by great daily effort. A reporter once asked him how he managed to play so well so consistently, and he said: “I always thought that there was at least one person in the stands who had never seen me play, and I didn’t want to let him down.””