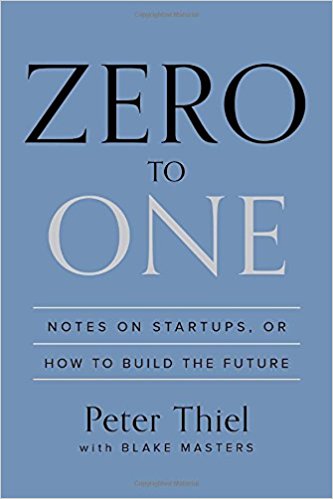 This is, in my mind, the best book on starting a real COMPANY. Lean startup is great for something that won’t die, but this is the book on making something that lasts. Definitely worth re-reading for founders.

The core lesson is that the best and most disruptive companies go “from zero to one,” from non-existence to existence, from no solution to solution, from nothing expected to something expected. Most companies, though, go from 1 to 1.1, or 1.1 to 1.11, they don’t make a huge disruptive change. To have a lasting impact, you must find a zero and create a new paradigm.

“Indeed, the single most powerful pattern I have noticed is that successful people find value in unexpected places, and they do this by thinking about business from first principles instead of formulas.”

A useful interview question (also for yourself): “What important truth do very few people agree with you on?”

“Startups operate on the principle that you need to work with other people to get stuff done, but you also need to stay small enough so that you actually can. Positively defined, a startup is the largest group of people you can convince of a plan to build a different future.”

“If you can identify a delusional popular belief, you can find what lies hidden behind it: the contrarian truth.”

“The most contrarian thing of all is not to oppose the crowd but to think for yourself.”

“What valuable company is nobody building?”

“We teach every young person the same subjects in mostly the same ways, irrespective of individual talents and preferences. Students who don’t learn best by sitting still at a desk are made to feel somehow inferior, while children who excel on conventional measures like tests and assignments end up defining their identities in terms of this weirdly contrived academic parallel reality.”

“If you’re less sensitive to social cues, you’re less likely to do the same things as everyone else around you.”

“The clearest way to make a 10x improvement is to invent something completely new. If you build something valuable where there was nothing before, the increase in value is theoretically infinite. A drug to safely eliminate the need for sleep, or a cure for baldness, for example, would certainly support a monopoly business.”

“The perfect target market for a startup is a small group of particular people concentrated together and served by few or no competitors.”

“But leanness is a methodology, not a goal. Making small changes to things that already exist might lead you to a local maximum, but it won’t help you find the global maximum.”

“You should focus relentlessly on something you’re good at doing, but before that you must think hard about whether it will be valuable in the future… in a power law world, you can’t afford not to think hard about where your actions will fall on the curve.”

“Part-time employees don’t work. Even working remotely should be avoided, because misalignment can creep in whenever colleagues aren’t together full-time, in the same place, every day. If you’re deciding whether to bring someone on board, the decision is binary. Ken Kesey was right: you’re either on the bus or off the bus.”