By Nat Eliason in Cafe 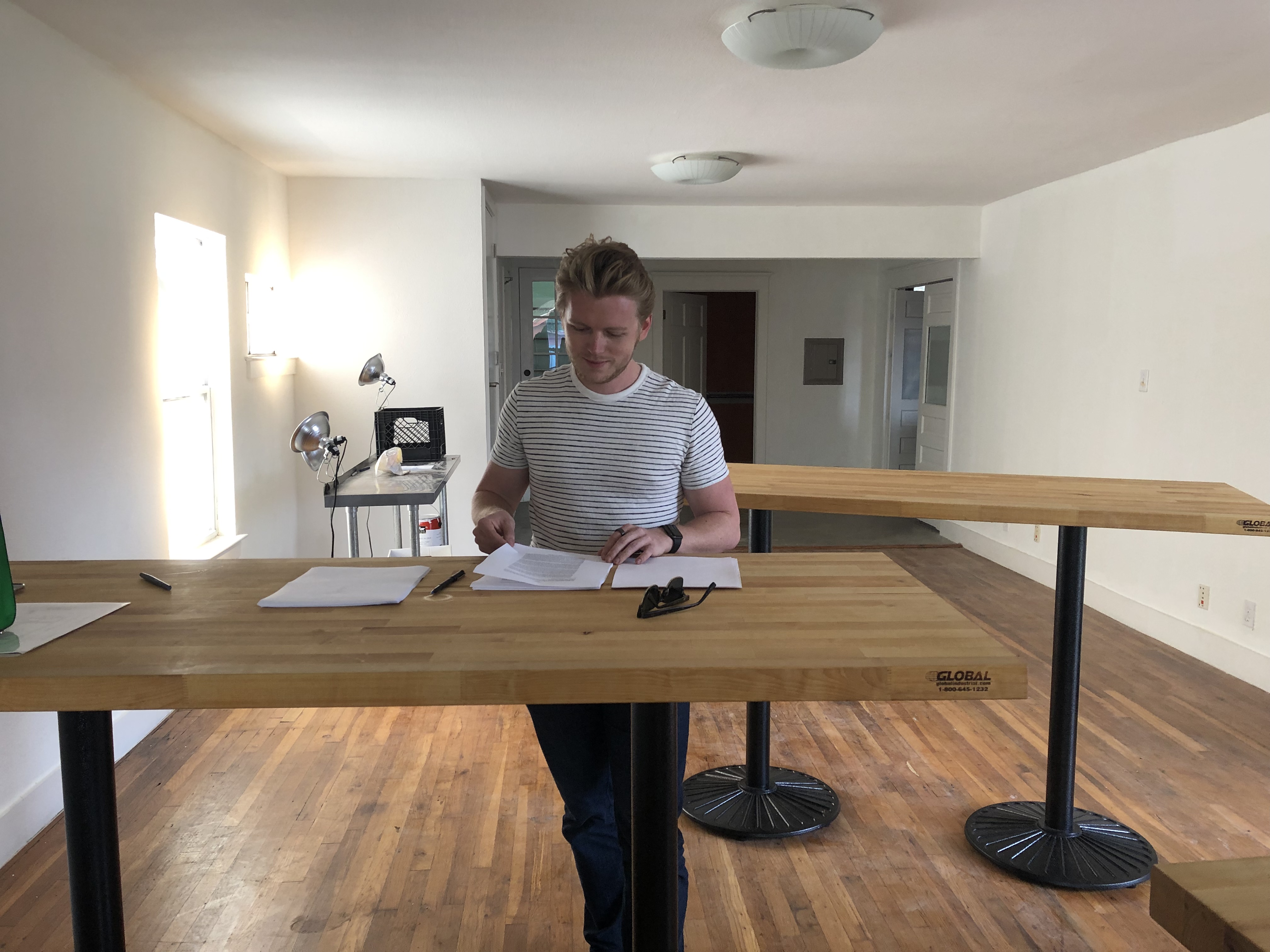 Brief update: Cup & Leaf Cafe is officially open! Stop by next time you're in Austin.

As of yesterday, Cup & Leaf has a cafe space in Austin!

It’s just an empty room right now and there’s a lot of work to do, but the lease is signed and now the real work begins.

Having a tea-focused cafe has long been a goal of mine, and a few things happening over the last year moved it from “something I might do in 20 years” to “let’s do it this year.”

While going down this road, I’ve realized how little good content there is out there around opening a physical business like this. The Internet is awash with articles related to starting online businesses, but there’s almost none about starting a real-world one.

So even though I’m only at the first stages, I want to start recording and publishing everything that’s going into this process for anyone who’s curious to follow along.

This post will cover the “why.” Why start a real-world business, why a tea cafe, why Austin, why now? I’ll also include some thinking around the finances, and the other notes that led to this decision.

After this, and as the cafe develops, I see a few other follow up posts:

And maybe some others along the way. We’ve only just gotten the lease signed, so I’m sure there will be tons of other things I’m learning and writing about as we renovate, open, and grow it.

But for now… why start a cafe?

The core reason is… I want to. But there are a few other reasons that made it seem like a good thing to try, and now to be a good time to do it.

These are all the sub-reasons that made it make sense to me, in no particular order.

We Already Have an Ecommerce Store

Most cafes are starting completely from scratch which increases their startup time and costs pretty significantly.

It’s still not going to be cheap or fast to get this off the ground, but starting the ecommerce store means we have a lot of things already figured out:

When the cafe opens we’ll already have ~50 kinds of tea we can offer, plus anything else non-tea I want to feature from local businesses.

There’s also the fact that the site works and is making money. Revenue has been growing as we’ve invested more time in it, so financially the cafe isn’t starting from zero either.

On the surface, starting a cafe might seem like a radical, unrelated departure from everything else I'm doing right now. But it actually supports the other projects in an interesting way.

But second, it supports Growth Machine by giving us something new to do marketing on, and to talk about relentlessly. Part of why we started the ecommerce store was so we'd have a site we could brag openly about (clients don't want us sharing their data, naturally), and now we have a whole new project to talk about.

Third, it will require learning a whole new form of marketing and SEO, which we can then turn around an offer as a service to other businesses in other cities once we master it.

Fourth, it's amazing for creating content (like this article you're reading), which my entire personal and professional brand are based on.

Fifth, and this is a small one, but it's a place to work from that pays for itself. Instead of paying for a WeWork, or trying to find space in other cafes... I can just work out of my own!

I think once you start having a couple of projects working, the synergy between them and new projects is extremely important, and I love the way this project fits in.

Amazon may be destroying mom and pop stores, but it can’t do much about local experiences and restaurants.

There are tons of places you can buy tea from online, and we don’t have such a specialized selection that you can’t replace us with another tea vendor. But if we can nail an awesome in-person experience, that’s a great competitive moat against other Internet tea companies as we can continue to grow.

The physical location also lends itself to interesting advertising opportunities that are potentially much cheaper, and more lucrative, than the insanely competitive search and social ads. Simply having an interestingly designed cafe people can post on Instagram is an obvious one. Co-promotions with other local businesses is another. There are a lot of ways to take advantage of it.

And, again, since we already have the online store, any local promotion can help drive online sales for people who don’t want to make the trip to the cafe.

This is a really big one to me. I’ve written about the value of challenging yourself, and starting a physical business is a whole new world of challenges I’ve never dealt with.

It’s tempting to think “okay, I’ve got this agency and content marketing thing down, let’s stick with just that,” but at some point I had no idea how to do the agency stuff either. But this is another level of difficulty beyond that, since not only do I not know how to run a cafe, but I also don’t know anyone who does.

This was a huge realization when I started down this path: I know dozens of successful Internet entrepreneurs, but zero physical business entrepreneurs. I have almost no one to pester with questions so that’s added another layer of complexity.

To me, that’s exciting. I feel that when you’re as young as I am (25), you should take career risks like this for the learning opportunity. You can settle in to something more comfortable later when you have a better sense of what you like doing and you’re good at, but I’ll probably never have a better time than now to say “fuck it, let’s open a cafe.”

And if it all goes to shit and I regret this decision… I’d rather learn that now!

The Potential Downside Isn’t That Bad

One of the sexy things about online businesses is that you can spin them up really quickly and cheaply, and dramatically limit your downside if it goes poorly.

Real world businesses are scary because of the investment you need to make, and the term length you’re committing to.

It’s really not that scary when we dig into it, though. Here are the big scary expenses:

Inventory we’ll have either way with the ecommerce store, so we can remove that from the equation. That leaves rent, build out, and employees.

Rent for the place we found is about $3,800 / month all in, so I could lose that amount per month. That would suck, but we could always repurpose the space into a Growth Machine office or sublease it, so that’s not so scary.

The build out costs are kinda scary, but we can get almost all the expensive hardware (dishwasher, ice maker, fridges, etc.) second-hand on Craigslist or rent it, and if everything collapsed they’d still have most of their value.

Employee costs aren’t so scary because if it’s not working… there will be no employees.

So the catastrophic scenario (aside from black swan events) is that zero people buy tea and I burn ~$3,800 a month and change until I figure something out.

But it gets better because…

The Potential Upside is Great

Now let’s be a little optimistic. Let’s leave aside all retail sales and just look at sales of tea, coffee, and kombucha.

With one employee working each shift, total costs for the month are ~$9,000. At $3.80 profit per drink, we only need about 6.5 sales per hour to break even for the month.

Or, we need two people to come in every twenty minutes. Not too crazy. And again, this is leaving out beer, wine, and retail sales.

Again, these are super rough numbers, but they show how high the upside can go relative to the potential downsides. And getting to 6-7 sales per hour sounds like something I can figure out.

I wouldn’t want to try to win SEO fights for “best bar Austin” or “best coffee Austin,” but there’s almost no competition for tea-focused places despite a good number of searches for it.

On top of that, a lot of local marketing just isn’t on the same level as online marketing, and I think there are lessons from the ecommerce / internet marketing world that can be brought to the local level and provide a big competitive advantage.

I’ll cover this in a future post, but it’s an exciting opportunity to play around with. Plus there are all kinds of marketing I’ve never played around with that I get to experiment with now.

I’d be happy if the cafe only broke even because I’m most excited about building and controlling a cool place for people to hang out, whether they’re coming by after work or co-working from there.

I’ve noticed that almost all of my friends want to feel like they have more of a community in their life, and I think that having a go-to spot where your friends also tend to hang out during the day is a big part of that.

If I can create a spot that some of my favorite people frequent, and where they know they’re likely to see some of their favorite people, that would feel pretty great.

Securing a Spot in Austin

This is more specific to my location, but I think the opportunity to lock in and grow a cafe in Austin’s east side is a pretty exciting opportunity. New restaurants apartment complexes are going up like crazy, and every existing cafe around here feels like it’s constantly overrun.

Getting in a good spot (more on finding it in the next post) now feels like I’m positioning myself to be in the middle of a very high growth area over the next few years.

I suspect competition will increase with the population, but establishing a local reputation now will help as more people move into this area.

There are so many fun things we’ll get to try with the cafe that I don’t currently have a good way of doing.

We can feature products my friends sell, we can do event nights, we can partner with breweries, we can do tea making classes, we can do memberships, we can promote local artists, we can be super dog friendly, we can do craft kombucha, we can spike the kombucha...

The ideas for things to try and fun experiments have been a non-stop flood since this opportunity came up, the hard part will be picking which ones to follow through on.

You Can Come Visit!

Okay, not actually one of the core reasons, but it would be pretty cool if people who read this site did show up from time to time. Like I mentioned above, it has the opportunity to be a community space, and I’m excited to get to work on it.

And again, this is just the first article in this series. If you join my email list below, you’ll know when future ones come out and when we open!

Update: Click here to read part 2 on finding and leasing the space!